Penguin plots his comeback with a little help from a new friend. Jim Gordon and his Uncle Frank part ways after the Court’s plans become clear. And young Bruce Wayne wakes up to find that he damn sure ain’t in Kansas, well Gotham, anymore.

As things get underway, the high council of the Court of Owls meet and vote on Gotham’s future. Once the tally is in, the members, Frank Gordon among them, all wearing asinine looking owl masks, make it a unanimous decision. Gotham must be destroyed. Ho hum, what else is new? It’s the mythology of the Batman, somebody’s always out to destroy the city. There’s mention of a custom made weapon that’s on its way to do the job. 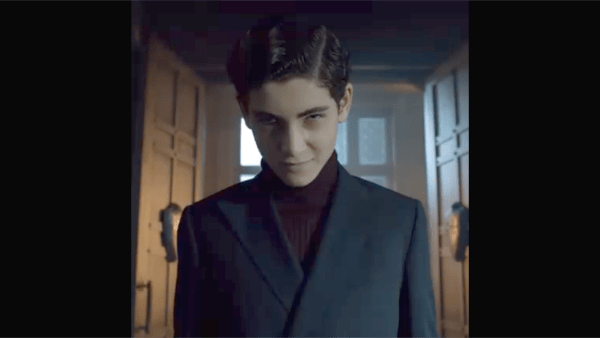 Back at the GCPD Jim Gordon and Harvey Bullock go over the old case file on the death of Gordon’s father. Gordon finds that the ‘drunk’ driver who caused the crash had a medical condition that would have resulted in death if he had even one shot of booze. Gordon has Bullock dig deeper into the driver’s file while he goes off to meet Frank. Gordon tells Frank about his findings on the drunk driver. Frank confirms this and then tells Jimbo of the Court’s plans to destroy the city. He mentions the weapon and then tells Jimbo that they should keep their distance from each other in case the Court’s finds out what he’s up to. He says that it’s up to Jim to stop the Court now. Bullock calls Gordon and tells him that the driver had quite a rap sheet and that his legal counsel was provided by Carmine Falcone. Ain’t that something?

Gordon and Falcone meet on somewhat tense terms. once Jimbo mentions what he’s found out concerning Gordon’s father things calm down. Falcone confirms that the Court put out a hit on Gordon’s father. He also confirms that he has worked with the Court. When asked, Falcone also tells Jimbo that the one who ordered the hit on his father was his Uncle Frank. Surprise, surprise, surprise! When Jimbo confronts his uncle with this news Frank confirms it. He also says that Falcone notified the Court about these recent developments. Frank had his brother Peter killed because he planned to expose the Court. When Jimbo tries to arrest him Franks turns the tables and cleans Jimbo’s clock. He then tells Gordon where on the docks and when the weapon will be arriving and then exits stage left.

Later Gordon tells Bullock the whole sordid tale about Frank and the Court. Gordon doesn’t have anyone else he trusts. Bullock is in. They need to get info on the docks without tipping their hand to the Court. Who they gonna call? Next we see the phone ringing at Barbara Keane’s club. She picks up and discovers who’s on the other end. “Lemme guess,” she says. “Do I hear a favor coming on?”

Down on the docks Babs and Tabby find that the package Gordon is interested in has already arrived. It’s stamped with the Indian Hill insignia. When they go to check it out, with a full complement of henchmen, they are met by one of the Court’s fanatical assassins. The henchmen carry guns, of course, while the assassin carries only a katana. Obviously the Court’s man makes short work of Babs’ boys. She and Tabby make a hasty exit stage right.

Meanwhile Frank appears before the Court because they’ve learned from Falcone that Jimbo is on to them. Kathryn orders his death. Frank calls and tells Jimbo to meet him. When Jim shows up Frank tells him about the Court’s order. Frank tells him that he needs to join the court and he tells him how. Frank then shoots himself in the head.

Later Gordon receives a call from Katheryn. He tells her that he’s killed Frank, just as his uncle advised. She suggests that they meet.

Young Bruce Wayne awakens to find himself locked up something that looks like a cross between a monastery and a prison. He has one mysterious captor, with no name, who tells him that they have quite the agenda planned. He starts out by giving Bruce the illusion of a chance to escape. This only shows the boy that he’s his prison is something of a maze. His captor tells Bruce that it’s time for him face his fears and this is the place where he will do it.

The captor unrolls a set of acupuncture needles. He picks one and places it in the boy’s forehead. Bruce immediately begins to relive the memory of the night of his parent’s murder. The experience frightens Bruce. The stranger tells Bruce that he wants him to go back to Gotham but not before Bruce learns what the captor has to teach. He says Bruce can’t do this until he is able to confront the fear of that night.

The next time his captor comes to the cell Bruce attacks him in an effort to escape. The boy is overpowered and his captor produces the needle, again. Bruce is again taken back to the time of his parents’ murder. This time his captor is there and Bruce lashes out at him again. He fails again. The captor tells him that he must rid himself of his pain so that he can become the person Gotham needs.

Penguin is still convalescing at Ivy’s but he’s getting a bit impatient. Ivy’s care has helped him feel better and now he wants to get on with his plans for revenge on Ed Nygma. After he and Ivy come to a small understanding he has her trot off to find one of his henchmen. A somewhat addle-minded soul named Gabe. Once said moron shows up Penguin lays out his plans to regain his post of the city’s crime kingpin. Gabe informs him that things are now being run by Barbara Keane, and Penguin can’t have that. He tells Gabe to get the gang together and get ready for action. While Gabe is making some calls Ivy voices her suspicions about Gabe but Penguin blows her off. Once off the phone Gabe asks Penguin if Ivy is suspicious of him. When Penguin confirms this Gabe cold cocks him. “Smart girl,” he tells the unconscious Oswald.

Penguin awakens to find himself held captive by Gabe who tells him that the gang is coming and they plan to auction off the right to kill him. Ivy, who stormed out after Penguin blew her off, gets herself captured while watching the happenings from outside. This may prove to be fortuitous for Penguin. See, in keeping with the actual mythology, it seems that Ivy’s already developed the perfume that she uses to bend any man to her will. After she and Penguin come to yet another agreement, Ivy demonstrates the power of the perfume. Calling over one of Gabe’s goons and letting the perfume take effect Ivy has him kill all the others except Gabe. They take his gun and Penguin takes action. After killing the last goon he has Gabe sniff Ivy’s perfume. This causes Gabe to tell the truth. He calls Penguin a freak and then Oswald dispenses with Gabe using a gardening tool.

Afterwards Ivy tells Penguin about the freaks from Indian Hill that Selina mentioned to her. She suggests that he use them to build the army he needs to reclaim his throne.

Gotham Recap: “How The Riddler Got His Name”

Gotham is back after the winter hiatus and things seem to be rather subdued, for Gotham City anyway. Ed Nygma...