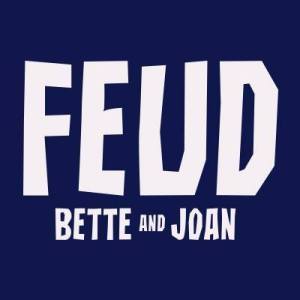 I love Susan Sarandon (bad political advice, aside) and Jessica Lange, so naturally I got excited when I heard about Feud–an FX miniseries about Joan Crawford and Bette Davis’s legendary animosity for each other (which I have always suspected was part fantasy—after all, outside of some comments Davis made (regarding Joan’s eager request to accept the Best Actress Oscar for anyone who won against Bette that year), neither actress ever spoke that poorly of the other—on record, at least. And much of the really nasty hearsay could easily have been made up—it’s pedigree is, at best, dubious. But it’s so much more fun to watch the one film they made together– Whatever Happened to Baby Jane? — when one imagines the depraved onscreen rivalry mirrored in real life!

Over the years, writers have devoted much ink to this legend. As the demand for more dirt grew, more and more people started coming out of the woodwork “remembering” things… until finally, it had become impossible to know what was real and what was fiction. Did these two women really despise each other? Or is it all the wet dream of bloodthirsty hyenas? Feud—an eight-part miniseries attempts to break it down for us.

Episode One establishes the premise: Our two ladies of cinema’s yesteryear find themselves pretty much stranded in 1962, each in their 50s and with matching moribund careers. Determined to stay in the game, Crawford takes the initiative to find a property suitable for herself and her old Warner Bros. rival, Bette Davis. She imagines that by teaming up (for the first time), the novelty factor of two old powerhouses sharing the screen will be too much for producers (and audiences) to resist. She was right of course because the property in question was the Henry Farrell novel, Whatever Happened to Baby Jane? Think Sunset Boulevard gone haywire—with not one but two Norma Desmonds, duking it out in their old Hollywood mansion. Bette accepts, agreeing to play the titular role of charismatically grotesque Baby Jane Hudson (with Crawford as her long-suffering, wheelchair-bound sister Blanche), and boom– we’re off to the races.

Immediately apparent in Feud, are the top-notch production values. Sets, cars, hair and makeup are all masterful, as is the supporting cast (Stanley Tucci, Catherine Zeta-Jones, Kathy Bates, Judy Davis). It’s intelligently written and nowhere nearly as camp as expected. It’s wildly speculative, of course, but then it would be boring if it wasn’t.

Are Lange and Sarandon dead ringers (no pun intended) for their real-life avatars? Kind of, if you squint your eyes a lot. Sarandon looks quite a bit younger (even though she’s almost 20 years older) than Davis was in 1962. She looks more like Margo Channing in All About Eve, from 12 years before. But that’s fine. It’s a great look. She’s clearly studied Davis’s movements and facial expressions more than her voice. Except for a random scattering of clipped phrases rendered with Bette’s idiosyncratic pronunciations, Sarandon uses her own voice and dispenses with mimicry. Once you let go of the need to hear that magnificent croak, it’s fine.

For her part, Lange has also studied Crawford’s sweeping grandiosity more than her facial expressions or vocal tics. Without hamming it up, Lange very subtly exposes the wounded and complex Texas hoofer behind the glacial mask of studied gentility that was Joan Crawford. She too avoids simple caricature.

As far as I can clock it, the writer’s perspective is that Joan–outside of simply wanting a hit movie to restore her career– is motivated by a craving for Bette’s stamp of approval, (supposedly since their 1940s heyday) and Davis is like the competitive older sister who can’t resist withholding it. She thinks Joan silly and artificial, and probably harbors some professional jealousy (Joan won an Oscar for her first big movie at Warners just as Bette’s career there was starting to wane) and maybe some private jealousy as well (Joan had once snatched Franchot Tone from Davis, who had designs on him, while Bette and Franchot were making the aptly titled Dangerous–for which she won her first Oscar–in 1935).

Granted, it’s only the first installment, but are these really the ingredients of an industrial-strength feud? To my mind, probably not. Unless you’re willing to pad it with lots of juicy speculation, but that, of course, is exactly what Feud does. So far in the narrative, Bette comes off worse for wear as a person than Joan—but I suspect Lange’s Crawford has some Disney Witch-strength shade to throw when the time is right. And likely, writers Jaffe Cohen and Ryan Murphy will keep us veering hither and yon once the sparks start flying, hardly knowing which side–if any–to root for.

Final analysis: It’s a hoot. Lange and Sarandon sportingly give it their all whether the script calls for them to be victims of an ageist, sexist industry, or willing participants in the crazy-go-round. Davis and Crawford’s more academic supporters may find fault with this voice or that lip-line, or with the speculative nature of the thing, but hell, at least Bette and Joan are still at our dinner table. These two brights lights are still in our constellation and in our conversation, as they well deserve to be.

One thought on “Feud: Bette and Joan — “Pilot””