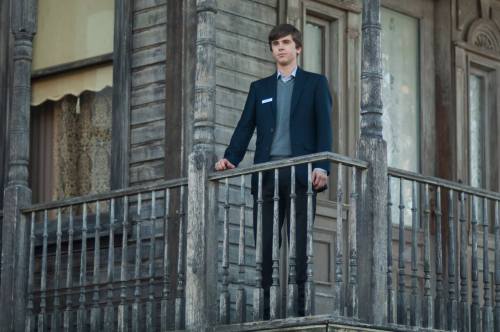 Before the start of the 5th and final season of Bates Motel, let’s review the fantastically dramatic Season 4 finale. It was worthy of “finale” status and gives us a Bates fix to hold us over until February 20th.

Although I knew Norma’s death was imminent, it still shocked and dismayed me. It felt too soon! This night, we meet in front of the motel. The strobe lights of emergency vehicles turn faces red, then blue, then red again. Norman lies dazed on a stretcher, not sure what’s happening. He sees another ambulance but no sign of Mother. He’s taken to the Emergency Room where he’s assessed and released. When he asks the nurse who will be taking him home, she has to break the news that his mother has died and she’ll need to summon an orderly to make transport arrangements. Norman’s face is blank. Alex arrives to pick Norman up from the hospital so they can have a little chat, then head home, or somewhere.

First chance he gets he grabs Norman by the throat and slams him into the wall, shaking Norman like a ragdoll and telling him he’ll make sure that he pays for what he has done. You don’t want to incur the wrath of Sheriff Romero. (Right, Bob Paris?) Alex is angry enough to kill Norman who’s been a thorn in his side since day one. Norman shrugs off Alex’s grasp and advises Alex that he’d best stay away from the funeral, it’s private.

Alex is disgusted and I’m disgusted. What the hell, Norman?? Once home, Norman sits and eats alone with a place set for Norma. Her empty chair is sad to see. It doesn’t give Norman much of an appetite, either.

Norman goes upstairs to Mother’s room and lies in her bed, holding her pillow, talking to her as if she was there. Freddie Highmore’s opened up Norman’s bag of tricks and surprises you by drawing emotions out of you that you hadn’t even considered. I’m so very sad that Norma’s gone, and I’m sad for Alex and Dylan and even Norman, too. How will Caleb handle it when he finds out?

Alex goes to the morgue, tearfully demanding to see his wife’s body. Against morgue policy, he’s allowed to open the drawer she’s in and slide her out. He takes her hand and slides her wedding band back onto her finger. He kisses her and tells her how much he will always love her, and his tears wet her face. I’m trying to watch through tears. She’s really gone!

At home, Norman talks out loud to Mother while in the bathroom, staring into the mirror. He begins to methodically throw his psychiatric meds into the toilet. He’s interrupted by the ringing phone. It’s the White Pine Bay funeral director who, after extending his condolences, asks that Norman stop by to arrange the service and to bring a dress for Mother to wear. The funeral director asks if he should also contact Norma’s husband. Norman says he will handle all arrangements, goes home kicks the crap out of the 60” television Alex purchased, knocking it half way down the front steps.

A woman pulls up to the motel. She’s detective Chambers from the Oregon police. She has some questions for Norman. Don’t we all? He tells her how he lay in bed next to Norma and they fell asleep. Then he rants about how much disdain he has for Alex Romero. He’s still bitter about Norma’s marriage. Norman fusses with the bedcovers while he talks. He holds up a blue dress and asks the detective what she thinks. The detective can tell he’s not dealing with a full deck, says it’s a nice dress and decides to see herself out. Good move, Norman’s got that look in his eyes again.

Norman sits in the waiting room at the funeral home. The funeral director’s son leads him into the office. He has to decide about embalming, open or closed casket, the service, her eulogy. Norman pleads to see Norma. He’s told it’s not a good idea to view the body while it’s still in the prep room, but they make an exception. Norman touches her cold face, then slides her wedding band off while holding her hand. He hallucinates that her eyes flash open for a moment, and must excuse himself. Those tears have finally started to fall a bit.

Alex stops by the furnace supply and repair shop, where he purchased the new furnace for Norma. He asks the installer if Norman was present when Mrs. Bates was warned about the carbon monoxide from the old furnace. Alex roughs the old man up for an answer. The poor guy stammers that he thinks Norman was there.

Back at the house, Norman rushes inside, thinking he hears Norma playing piano. He’s disappointed to enter a dark and empty house. Juno runs down the stairs to greet Norman. Uh-oh, a jumping Juno is never a good sign. Stuffed, mounted dogs don’t move in my world. I think we’re in crazy town again. Dylan calls Norman to let him know he’s decided to stay in White Pine Bay for a while to give him the support he needs. Norman says that he thinks Mother would have wanted them to sever ties. Dylan is speechless and they end their call. Again, what the hell, Norman?

It is the morning of the funeral, and Norman sits alone in the church. He tells the funeral director that there are no guests attending, so the service can start. Norman reads a glowing eulogy, that suddenly turns into a rant about God and his sucky Divine Plan. I had to clean that up a bit. Alex walks in and Norman tells him to get out, but not before smugly handing him Norma’s wedding ring. Alex clocks Norman using every bit of the anger he’s been holding back. Yeah, Alex, knock his block off! He’s removed from the church by the funeral director’s son, and heads to the police station where he angrily barges in to grab his gun. He’s half-mad with grief and anger. As Alex leaves, he walks right into the arms of DEA agents who bust him for perjury. After all, he did tell a federal agent that he had no personal relationship with Rebecca Howard. That Rebecca is like gum on your shoe, a sticky mess that’s hard to get rid of. The DEA probably saved Norman’s life, though. Damn!

Norman is having an argument in Norma’s bedroom, demanding that she make herself seen already. It’s too hard on his own, what is she waiting for? He drives to the cemetery, shovel in hand and begins to dig. He reaches the casket and pries it open. Norman’s so glad to see Norma. He holds his mom’s corpse and kisses her, and then puts her in the car. At home, he brings the body up the long flight of stairs. A barking Juno greets them at the door. Norman puts her on the sofa and tells her that it’s safe for her to open her eyes now, but she won’t. A little quick-bonding glue and some ingenuity, and those now opaque baby blues are eternally wide open. Egads! Norma is in a permanent state of ghoulish surprise. Norman keeps begging her to look at him.

There’s a knock at the door, and Chick is there with a casserole and words of sympathy. As usual, Chick lingers. He moves in close to look at Norman, telling him how sudden and difficult death can be. He asks Norman if he really understands that Norma is dead. One nut to another, he can see Norman’s not wrapped too tight. Chick promises to stop by every few days to check on Norman, then shuffles out the door. Norman tries to pull himself together, staring into Norma’s dead blue eyes, again begging her to look at him. So alone and confused, he begins to cry. He kisses her cheek and runs upstairs. He grabs the gun in Norma’s nightstand and puts it in his mouth but before he can pull the trigger, he hears the piano playing and Juno barking. Hey! The gang’s all here! Norman walks down the stairs into the living room to find Juno dancing around happily, and Mother playing piano in her Christmas finery. The decorations and lights are up and Norman is stunned and overjoyed. Norma smiles at Norman and pats the piano bench. She plays “I’ll be Home for Christmas” and he puts an arm around her waist. The changes Norman’s about to undergo are intriguing. It’s sad to lose Norma, but we know she’ll never truly leave us. She promised.

Things are going to get really crazy, be ready!
Bates Motel will return for Season 5
tonight on A&E
at 9/8c

On Bates Motel Norman tries to bond with his mother and show her that he’s okay. Alex and Dylan become...