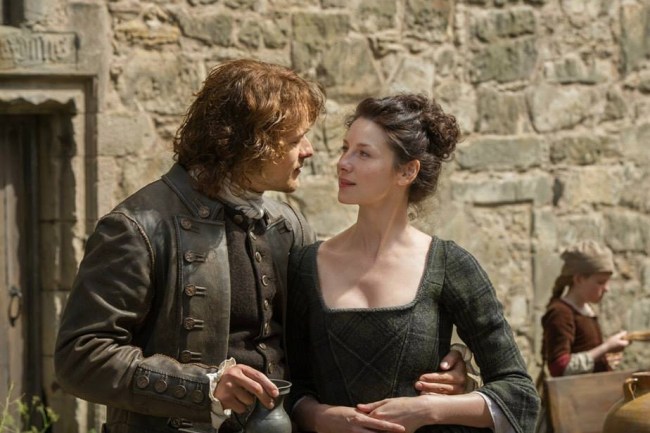 Ever since becoming trapped in 18th-century Scotland, Claire has been trying to reach Cragh na Dun, the ancient stones, which caused her accidental time travel. Claire passed the time (no pun intended) by marrying dreamboat Jamie Fraser (it’s complicated), Jamie is nearly perfect, so perfect that after Claire finally confessed her bizarre secret, he took her to the stones so that she could return to 1945. When Jamie walked away so that Claire could go back to Frank Randall, modern conveniences, and disinfectant — which the nurse is always yammering about. No woman in her right mind would want to live in the dangerous and violent year of 1743, right? Have you seen Jamie?  Buh-bye, disinfectant.

With Claire back in Jamie’s muscular arms, they make the trip to Lallybroch and Jamie learns more about his mysterious wife. It goes like this:

Jamie: I know you’re from 200 years in the future, so how old are you?

Claire: According to the show, I’m five years older than you, but In real life I’m a year younger than you, so shut it down. Why did you have to bring up age? Now all the ladies in the audience are going to Google and feel ashamed about crushing on a man who was born while they were in high school.

Jamie: So there are flying machines? Man, I wish I could ride in one and get in the mile-high club.

Claire: Don’t worry about it, you’ll continue to handsome all over the place and raise the expectations of women everywhere as we have fantasy sex.

The Frasers reach Lallybroch, the family estate, where Jamie will take his rightful place as laird. Jamie’s been in hiding for four years since there’s a price on his head, but it’s believed that he’ll receive a pardon from the Duke of Sandringham. The Duke seems kind of shady so Jamie shouldn’t get too comfy hiding in plain sight.

Just an FYI: Lallybroch is also known as Broch Tuarach because the only thing Outlander likes more than making Jamie take off his shirt is confusing everyone with Gaelic. This is probably the only time I’ll write the words “Broch Tuarach” because it’s a waste of keystrokes that could be devoted to Jamie’s various states of undress.

Back at Lallybroch, Claire and Jamie receive a warm welcome from his sister Jenny. It goes like this:

Jenny: Hey, where you been? Meet your nephew, I named him Jamie.

Jamie: Wait, what? It’s all my fault I couldn’t stop Captain Black Jack Randall from raping you and now you’ve named his child after me? Stop trying to make me feel bad. Are you pregnant? Now you’ll have two bastards. Oh, the shame! This is probably my fault.

Jenny: Yeah, maybe you’d like to hear what happened before you make wild accusations. Here’s your old friend Ian Murray, we’re married and he’s the father of my children. So, who’s this English trollop? I should tell her how I used to literally grab you by the balls to make you pay attention, but let’s talk about how after seeing you tortured by Black Jack I thought you were dead.

Jamie: No, let’s make things more awkward by having a family discussion detailing how Black Jack Randall raped you, so I can continue to torment myself about a situation I had no control over because I was totally outnumbered. This recapper is bad at math, but I think I was probably only 18 at the time.

Jenny: Okay, I’ll talk about it just this once. After I said I’d go with him to save your life, he dragged me upstairs and talked a lot. I wasn’t paying attention because I was too busy thinking about how I was going to kick his ass. I waited around while he kept trying to … what’s a ladylike way to put this? Let’s just say Black Jack just couldn’t rise to the occasion, if you know what I mean. While he was standing around trying to choke the chicken, spank the monkey, beat the meat or what have you, I just repeatedly laughed in his face until he called me a “See you next Tuesday,” knocked me out and left in shame. Ugh, I hate that guy. Well, at least this English trollop you brought home isn’t a time traveler who is married to one of Randall’s descendants because that would be weird.

By the way, during the attempts at self-stimulation, did you see what I think I saw? It was hard to tell, but it looked like we saw more of Tobias Menzie than expected.

When Claire and Jamie are alone, he exposits about how much he loved his father. After Jamie’s first public whipping at the hands of Black Jack, Jamie’s father pleaded in vain with the captain to show his son leniency. Black Jack did make Jamie an offer, in order to avoid receiving 100 lashes for the second time in a week, all Jamie had to do was allow himself to be — and this is Jamie’s word — “buggered.” Jamie thought that might be the least painful and most expedient option, but refused to be broken, so he submitted to another 100 lashes. His father, who unbeknownst to Jamie was in the crowd, died on the spot. Poor Jamie didn’t even get to go the burial and has never even been to the grave.

The next day, the tenants celebrate their laird’s return and meet Lady Broch Tuarach (Damnit, I said I wouldn’t type it, but that’s her title now.) Instead of boring you with details, let’s just say that Claire starts another one of her fights with 1743 and Jamie fixes things by coming home so drunk that we are all cheated out of another episode of Fraser fantasy sex so the whole thing is annoying. Despite being nearly perfect, Jamie is doing a rather slip-shod job of being the laird, but let’s skip ahead to the important part. There’s a problem with the mill and the only way to fix it is to have Jamie handsome all over the place and wade into the pond bare-bottomed. While Jamie is underwater, Jenny warns Claire that some redcoats are coming and Lady Broch Tuarach needs to keep quiet so they won’t hear her English accent. These redcoats are pleasant and try to help with the mill. The whole incident results in a hidden Jamie having to take off his shirt so that he can later emerge from the water fully naked. Fully. His hand is the only thing keeping this from turning into porn. Outlander loves its audience enough to have the camera linger on this scene for as long as possible. That sound you hear is millions of ovaries exploding.

Jenny, who saw her brother’s scarred back when he was in the water, has a heart-to-heart with him at their father’s grave. She blamed Jamie for their father’s death, but now she blames herself for Jamie’s torture at the hands of Black Jack. Jamie, who regularly finds reasons to feel guilty, also blamed himself for their father’s death. So excessive guilt is apparently a family thing, the sibs hug it out and finally agree that the only one at fault is Black Jack.

Claire and Jamie talk about their arranged marriage and admit how much they love each other. So everything will be fine now, right? Right? Nope, Claire wakes up the next morning to find a man holding a gun to Jamie’s head, Jamie still manages to handsome all over the place.

Please note that comments don’t appear immediately. If you’ve read the books, please don’t share any spoilers for those who have only watched the TV show. Thanks!!!

Take our Outlander Quiz and Poll!

The addictive series Outlander is the best part of Saturday night. How well do you know the TV show? Take...