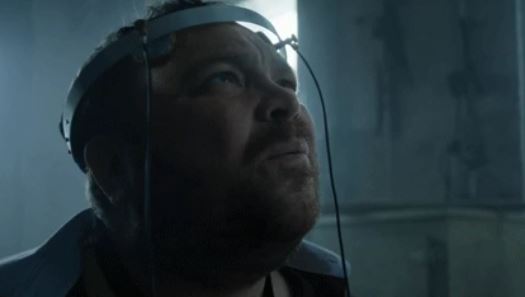 Damn! That title is more relevant to the current real-life situation than to the goings-on in the story. Anyway, political commentary aside, it seems to be couples week in Gotham. Lee Thompkins and her fiancee, Mario Falcone, are ready to tie the knot but there’s a small hitch in their git-along. Butch Glizean and Tabitha Galavan’s little bond is tested by Ed Nygma. Bruce Wayne and Selina Kyle sink deeper into the mess that was created by their pal Ivy Pepper. And James Gordon and Barbara Kean find themselves involuntarily thrown into these situations to act as voices of sanity. Confused yet? Good. Now, shall we.

The scene opens with a quiet, cozy dinner for three. Carmine Falcone has brought his son and future daughter-in-law to the restaurant where he wants to hold the wedding rehearsal dinner. He wants to know if the place meets with their approval. It does. On the way out, Carmine asks that his car be brought around. The valet, wearing a red jacket, (hint to you Star Trek fans) eagerly obliges. When he starts the car up it explodes. Well, at least Carmine won’t have to tip him. Things are off to an explosive start. Of course Gordon shows up at the scene and he and Carmine have a little aside. Gordon tells Falcone to stay out of it and let him handle it. Falcone gives him 24 hours.

Back at the precinct we find Harvey Bullock in charge in Barnes’ absence. When Lucious Fox turns up with the info on the explosive used in the car bombing Bullock immediately knows who to look for, a local bomb maker named Fuse. Of course when he and Jimbo arrive at Fuse’s place of residence they find the explosives nut on the floor in a pool of his own blood. Talk about a dead-end. Gordon finds a file under the bed that points to the real target of the attack – Mario. Sure enough a couple of killers on a motorcycle attempt an attack on Mario in the hospital courtyard. Gordon, of course, arrives just in time to save his ex-squeeze’s fiancee’s life. He takes Mario into protective custody.

At the precinct, Gordon tries to get Mario to cancel the wedding until he can catch the would-be killers. Mario won’t play along so Gordon has Bullock keep an eye on him while Jimbo goes for a sit-down with Carmine. Gordon asks Carmine if Mario is mixed up in something. That’s the only reason Gordon can figure that somebody’s after him. Carmine has no info to give. Bullock calls to say that Mario left the station intending to handle the situation on his own.

Gordon finds Mario out in public at a local jeweler. He’s looking to draw the killers out and finish things. His plan works: the goons show up and a bit of the rough and tumble ensues. During the tussle Mario exhibits an all-too-familiar rage and ends up dispensing with one of the goons — permanently. Gordon lets it go for the time being. Back at the station, the surviving suspect in in the interrogation room. Carmine has a talk with him while Gordon and Bullock are otherwise occupied. Carmine’s figured out what’s going on and all he wants is confirmation. He gets it by removing one of the goon’s teeth, which has the owl insignia on it. Well, this is an interesting turn of events. When we next see Carmine he’s meeting with Katheryn. He requests that the Court leave his son alone. When she refuses, he mentions that he will make things very difficult for them. Katheryn requests Carmine’s assistance when needed; in return the Court will allow Mario to live.

Penguin is having a small get-together with the heads of Gotham’s five crime families to discuss how to take advantage of the fact that the head of the GCPD is currently lodging in Arkham Asylum. Things are suddenly interrupted by a gun-wielding Barbara Kean who’s rather intent on finding out about her gal-pal Tabitha and their buddy Butch. It seems they’ve gone missing. After the guns are lowered Penguin manages to convince her that he doesn’t know anything about the situation. Babs backs away, for the moment.

Afterward Penguin rings up Ed Nygma to inform him that Babs is on the hunt for her pals. He implores Ed to finish up the little project with which he is currently involved and get back to his duties as the mayor’s chief of staff. Ed politely brushes him off. “I need to work through my grief my way,” he says. He’s still suffering from the loss of his latest one and only, Isabella. Believing Butch to be responsible for Isabella’s untimely demise it seems Ed’s gone and abducted both Butch and Tabby. They sit bound and gagged before him waiting his next move.

Ed’s got some fun and games planned and he proceeds accordingly. After a small question-and-answer session followed by some electro-shock for Butch, Ed reveals his master plan. He demonstrates a small guillotine attached to a timer. At the end of 55 seconds the blade drops cleaving a small log in two, proving its sharpness. Nygma explains the his reasons of revenge to the un-happy couple and then proceeds to place Tabby’s hand in the guillotine. He then places a switch in the condemned hand and gives her a choice. The switch will stop the timer on the guillotine but it will also administer a lethal jolt of electricity to Butch. Ed sets the guillotine timer and leaves the decision to Tabby.

In the meantime, Barbara returns to Penguin’s estate, knowing that he’s out and about, to have a short con-fab with the maid. Using her charm, and a rather large emerald ring, she gets some info. The maid tells her about Penguin’s infatuation with Nygma and then presents her with a bill from a local shop that sells bondage wear. Now Babs is getting somewhere. She visits the shop and gets the location of Ed’s ‘hideout’.

Back at said ‘hideout’ things are a bit tense and truths start to come forth. Tabby admits that while she likes Butch he ain’t worth loosing a hand over. Butch says he understands but that he he loves her and he tells her to save herself. Butch then tells Nygma that he killed Isabella by putting a bullet in her head. As he’s telling Nygma this, Tabby turns to him and tells him she thinks he’s sweet. She then drops the switch just as the timer goes off. Next thing ya know her hand’s on the floor – still twitching. Tabby goes into shock and Ed realizes that Butch isn’t the guilty one here. Babs shows up and she, Butch and Tabby head for the hospital. At the hospital Babs figures out who killed Isabella. And she’s figured out how to make this info work for her, Tabby and Butch.

So stately Wayne manor has been giving shelter to Selina and Ivy since the events of last week made them and Bruce targets of a group of murderers. Selina is none too pleased with the current arrangements. They are cramping her style. She implores Bruce to let her leave but he isn’t having it. The house has a top rate security system and he’s worried about her safety. Ain’t that sweet. Meanwhile Bruce is trying to discover the secret of the key they found in the necklace that Ivy stole. It appears to be the reason for their current predicament. While Bruce studies and Selina stews, Ivy is busy using her chemically induced charms to get Alfred to tell her how to disarm the security system so she can take some plants outside to get sunlight. Needless to say that’s not a bright idea.

Impatience being the mother of invention, in this case anyway, Selina takes matters into her own hands concerning the key. Figuring that it’s very old she drops it into a solution of vinegar and baking soda hoping that this will remove decades of grime from the key. It works and she and Bruce discover an insignia on the key in the shape of an owl. This leads Bruce to consult Alfred and they figure out that the key has something to do with the group responsible for the murder of Bruce’s parents. The group, headed by Katheryn, that Bruce agreed to stop investigating in order to keep breathing. Having this key could make things a bit difficult. Believing the killers to be in the employ of said group Bruce figures that they need to meet with these people to explain themselves. It’s about that time that they find Ivy missing. As if on cue (and it was on cue, this IS TV, remember?) the phone rings. Ivy’s abductors are calling. They want the key.

Alfred, Bruce and Selina arrive at the location and end up going down into the sewers for the meet. When they come face to face with Ivy’s abductors Bruce finds out things are not what they seem. It turns out that this bunch does not work for Katheryn’s group, they are working to destroy it. Bruce also finds out that Kathryn’s group has a name, the Court of Owls. The gentlemen standing before Bruce call themselves the Whisper Gang. They’re smugglers who have been crossed by the Court. They want the key because it opens a safe housed in one of the Court’s building. This safe contains a device that the gang believes will destroy the Court. Bruce enters into negotiations with the gang to arrive at a conclusion both parties hope will be beneficial.

Later on the docks the two gang members Bruce spoke with encounter the Court’s hitman who comes at them with a blade, killing one of them instantly. The other, the one Bruce spoke with, manages to hold his own. The hitman asks bout the key. When no answer is given the hitman completes his task.

Lee Thompkins makes an unplanned stop on her way to the rehearsal dinner. Gordon opens his door to find her standing there. They converse and he tells her that he missed his chance with her. Now he just wants her to be happy. She says they never had a proper goodbye. They share a kiss and then she leaves and gets back into her waiting cab. As the cab drives off we see that Mario has been standing on the street watching. He doesn’t look happy. When he’s accosted be a couple of street thugs we see what the real deal is. As the voices in his head tell him that Lee loves Gordon the two thugs attack. They don’t last very long and we see that Mario has a ‘touch of the Tetch’ in him. Looks like ‘love on the rocks’ to me.

On Gotham, Capt. Barnes decides to serve true justice, Selina Kyle gets a surprise visit from an old friend, and...