Spencer and Emily have taken their turns on the board and the Liars have already figured out that the game wants to send them somewhere. Unfortunately, they have to receive all the puzzle pieces before they know their final destination. So who is next? Hanna Banana climb aboard! 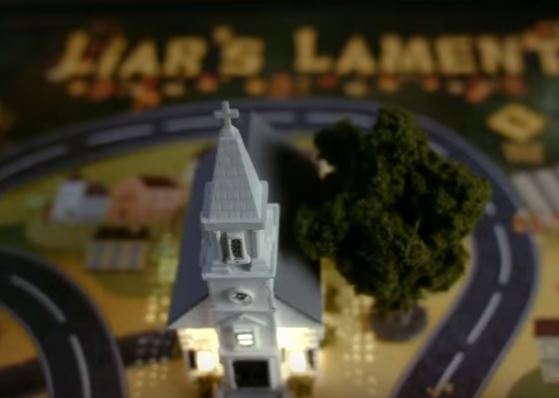 Hanna has had a rough few days since the board arrived and now it’s her turn in “Liar’s Lament.” One positive thing that’s happened for Hanna is the senator’s daughter was seen wearing her dress at a charity event. Yay! However, a blogger reveals the dress was a stolen design from Hanna’s former devil boss. Boo!

When looking at event pictures, Emily and Caleb spot Sydney one of Jenna’s old “friends” from high school. While Hanna deals with the game, Emily and Aria set out to find her in New York.

Caleb still doesn’t know about “Liar’s Lament” until A.D. ships a Hanna-sized mannequin to her apartment. This forces Hanna to tell Caleb about the Jumanji-esque game. In typical Caleb fashion he believes he can hack it. The life-like doll speaks and tells Hanna to “please see the appendix.” Unfortunately for Hannah, the doll meant its own appendix and not one in the back of a book.

Hanna goes all Grey’s Anatomy on the doll, cutting it open and revealing an outfit tightly wrapped inside a plastic bag. It’s a very short and slightly offensive dress she has to wear to her meeting with Lucas and their potential Japanese investors. Not being able to back out, Hanna conceals the dress with a trenchcoat and hopes for the best.

In New York, Aria and Emily track down Sydney. Emily ambushes Sydney outside her office while Aria hacks into her phone from the car. Sydney tells Emily she wasn’t the one who shot Spencer because she was at the Radley that night delivering a message to Caleb and Mona as a “practical joke” from Jenna. Sydney said that was the only time she spoke to Jenna since high school. Um, okay.

Apparently Caleb’s crash course in hacking worked and Aira was able to access Sydney’s entire phone and schedule. They follow Sydney to the Vogel Vision Institute where she makes a deposit for Jenna’s surgical procedure. The name on the deposit? A.D. This apparently means “anonymous donor.” I can’t make this up!

Aria and Emily watch Sydney leave the institute and text word of the task’s completion to an unknown number. The two jump Sydney and demand to know where Jenna is located and who A.D. is. Sydney says the donation was from a client at her bank and she hasn’t spoken to Jenna since the night of the shooting. Semi satisfied with her answers, the duo lets Sydney leave but not before Aria slips a tracker into her bag.

In the barn, Caleb is trying to crack into the game when Spencer arrives home from her day date with hunky detective Marco. As she’s grabbing them beers, Caleb pops the church piece off the board. A gas is released into the air and Caleb starts to have trouble breathing. Spencer frantically calls 911 and texts Hanna.

Hanna receives the news about Caleb before her and Lucas meet with the Japanese investors. Lucas tells her to leave and this spares Hanna the embarrassment of her outfit. Unfortunately, because she left to be at Caleb’s side, she fails to complete her turn and doesn’t get the third puzzle piece.

Ending on creepy news (I mean it is Pretty Little Liars), Aria comes home to Ezra’s apartment to find Nicole sitting alone in the dark. And, the Rosewood Police open a package with a severed finger inside that’s may belong to Ali’s dead mom.

Well next week should be fun!

Who is A.D.?: Paige (I read a convincing argument that is starting me make lots of sense)

Quote of the Episode: “Guys aren’t going to go through a girl’s purse because they’re too afraid to accidentally touch a tampon.” – Hanna

Pretty Little Liars Recap: “These Boots Were Made For Stalking”

GTL: Games, texts and lies is all the Liars know these days. They’re trying to figure out Liar's Lament and...