Special Contributor Ralph S. says it seems like ‘old home’ week in Gotham, as a bunch of familiar faces show up to make mayhem. Find out more in this recap. – David F. 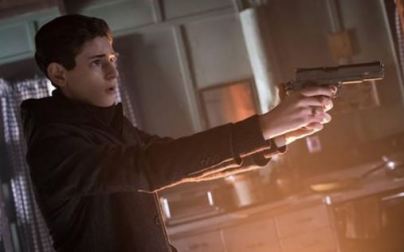 At the end of last week’s Gotham, we saw Barbara Kean show up at Jim Gordon’s door after being released from Arkham. Jimbo does the natural thing in response, he pulls on gun on her and asks how she got out of Arkham. She explains that after coming out of the coma she saw the error of her ways and she’s now completely sane. He ain’t having any of it. Before he throws her out, Babs spots a file with a picture she recognizes. She quickly realizes that Gordon’s back on the Wayne murder case. The picture is of ‘The Lady’, who used to arrange hits for money. Jimbo refuses Babs’ offer to help. He now has somewhere to start looking, though.

Bullock shows up to confer with Gordon and reminds him about The Lady and how she contracted out a bunch of guys to kill him. She went out of business after Jimbo refused to end up dead. So, before you can say ‘Flash Gordon’ ole Jimbo’s back on the street hunting down hitmen and asking them where to find The Lady in a none-too-polite fashion. One finally gives him the name of the Artemis club and that’s where Gordon ends up. Ah, but there’s one small problem. This is a females-only club, for criminal types at that, and the woman working the door has no problem showing Jimbo her piece (get your minds out the gutter, I’m talking about a  gun here). Babs shows up and tells Jimbo that she can help him out by talking to The Lady. She tells him she knows what the Wayne case means to him; he lets her go on.

Babs has a drink with The Lady, gaining her confidence by explaining how she got out of Arkham. She claims that her show of remorse was all an act. Now she wants to find some mischief to get into, she has money and she suggests to The Lady that they go into business together. Meanwhile Jimbo, ever the persistent one, is trying to gain entrance to the club via the back door. He’s caught once again by the woman working the door, but this time she ushers him in. Babs meets them and invites him to have a chat with The Lady — at knifepoint.

Tied to a chair, Jimbo finally meets The Lady and learns Babs’ ‘ulterior motives. Menacing Gordon with a cattle prod, Babs explains to her new partner that Jimbo’s looking to find out who hired her to carry out the hit on the Waynes. The Lady swears that doesn’t know who it was but that he was called ‘The Philosopher’. Mission accomplished Babs uses the cattle prod on The Lady and her henchwoman and then helps Gordon escape. Out in the alley Babs again tries to explain to Gordon that she’s really changed and she just wants him to trust her. Again he rebukes her and then just leaves her standing in the alley — alone.

Stately Wayne manor is abuzz with activity now that young Bruce is back after witnessing the strength of street knowledge. Lucious Fox has fixed Thomas Wayne’s computer and it’s now decrypting all his old files, a process Fox says could take weeks. Bruce, however has found his father’s calendar and notices that he had a meeting with a woman named Karen Jennings the week before he was killed. The meeting took place at a spot called Pinewood Farms. Fox explains that Pinewood was one of the codenames Wayne Enterprises used for its ‘black-op’ programs. “A bland name covering up nasty business”, he tells Bruce and Alfred.

Bruce and Alfred have no problem finding the address and upon entering the house come face to face with Karen, after she almost maims Alfred of course. Alfred draws his gun and tells her to drop her weapon. She explains that she can’t and then holds up her left hand; actually more of a claw. Next comes the sordid tale of how that happened. Karen was born with a deformity and because of that she was abused by her father. When she pushed him down the steps in an effort to get him off her he broke his neck. She was sent to Blackgate for murder and that’s where she volunteered for Pinewood. It seems Pinewood was a bio-engineering program and she was one of its first subjects. That’s how she got the claw. She mentions that there was one man in charge of the program. She never heard his name but she couldn’t forget his face. She tells them that when Thomas Wayne found out about Pinewood, he shut it down and he did whatever he could to help Karen. Bruce asks her for help in finding out more info.

Karen takes them to the deserted Pinewood and they check the place out. Of course they are followed by some goons who are looking to shut Karen up. When they try to leave things get ugly. The goons attack and Karen slashes one’s throat while Alfred shoots the other. The cops show up then, having been called by an elderly security guard. Everyone involved then gets a trip to the pokey.

At the station Bruce calls Gordon and he comes right over, leaving Babs all broke, busted and disgusted in the alley. Barnes wants Karen sent back to Blackgate but lets Bruce and Alfred go. Over coffee with Gordon in a nearby diner they go over everything they’ve learned and then they hatch a plan to free Karen. If they don’t she’ll be killed once she gets to Blackgate.

Over at Arkham, Hugo Strange is busy with yet another experiment for which he has great enthusiasm. It’s a reanimation experiment on ‘patient 44’. During the preparation his assistant, Miss Peabody, informs him that someone is looking for Karen Jennings. Strange recognizes the name and becomes somewhat alarmed. It seems Strange experimented on her as well with somewhat deadly results. However no one has been able to locate her for quite a few years. That’s changed.

Upon finding out that Karen has resurfaced, Hugo realizes that she can’t be allowed to talk. He decides to send another familiar face after her — Victor Fries.

Gordon, Bruce and Alfred are successful in their attempt to free Karen while she is being transported to prison. They wear masks and bribe the guards. During all this they ask her about the Philosopher, and she confirms that he was the man running the program at Pinewood. However, as they are making their getaway they encounter Fries all decked out some new togs that allow him to walk about in the real world while keeping his body temp at the ebb-freezing level. Oh yeah, he’s also got his gun which he uses on Karen and then smashes her frozen body to pieces on the street. Jimbo, Bruce and Alfred manage to escape back to Wayne manor. There Fox informs them that he may have found the Philosopher. He shows them a picture of a group of men that includes Thomas Wayne. The caption under the picture names all the men. The man standing next to Thomas Wayne is Hugo Strange and the caption gives his nickname – the Philosopher. Bruce, realizing the gravity of the situation facing him, grimly vows to fight on.

Just a quick note about Babs. It seems that while all this other stuff is happening she finds somewhere to go where she is welcome. She ends up at Butch and Tabitha’s crib. It seems that Tabby’s more than pleased to have her there. “She’s come home,” Tabby tells Butch.

Over at Arkham it seems that Strange’s reanimation experiment has met with success. ‘Patient 44’, who was definitely dead, has come back to the living – with a vengeance. He attacks and disables all the guards who attempt to restrain him, killing the last one. When he looks up we see that the patient is none other than Theo Galvan. Didn’t I tell you this episode was just full of familiar faces. Strange has been watching all this with growing excitement, and he’s also learned from Victor that Karen talked to Bruce and Gordon before she died. “I think life is about to get very interesting for us,” he tells Miss Peabody.

On Gotham, Bullock tries convince Jimbo to go on the run and get out of Gotham but Gordon is determined...