It looks like there’s gonna be quite a bit of discovery going on this week in Gotham and these doings wind up shedding quite a lot of light on gloomy Gotham. Find out how in Special Contributor Ralph S.’ latest recap. – David F. 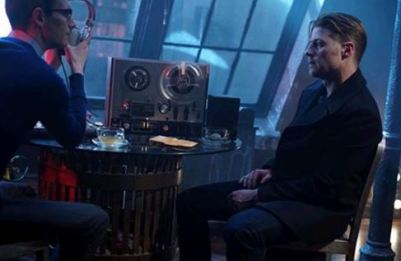 After busting outta the big house we find Jim Gordon hiding out at his partner, Harvey Bullock’s, place. Bullock tries convince Jimbo to go on the run and get out of Gotham but Gordon is determined to find out who framed him for Theo Galavan’s murder and clear his name. Bullock lets him know that there’s currently a reward of ten grand on Jimbo’s head. He mentions that IA should have a tape of the person who called in over the tip-line and grassed on Gordon. Bullock uses some ‘extreme’ measures to give Jimbo an opportunity to get the tape. The voice on the tape is electronically disguised but Gordon hears a sound on it that he thinks might be a clue to the tape’s origin. In order to clean up the audio on the tape Jimbo goes to get help from an old ‘friend’ – Ed Nygma.

Bruce and Selina have been busy with their own little crime spree. Seems they only target those in the underworld, relieving the crooks of their ill-gotten gains. This way the poor little rich boy doesn’t have to deal with a guilty conscience. Bruce calls it ‘research’ and seems to be bonding with Selina.

Gordon goes to see Ed, who’s more than a bit surprised to have a known fugitive show up at his abode. Nevertheless Ed agrees to help Gordon. Since we know Ed is the one that killed the cop and framed Gordon, it’s no shock that he’s on edge about this. Of course, though, Ed quickly comes up with a plan to solve his problem. He cleans up the tape and lets Gordon hear it. Almost immediately Gordon hears the sound and recognizes it as a cuckoo clock, the same clock that is going off at that moment in Ed’s apartment. I guess Ed wasn’t paying attention in history class when they went over the subject of Watergate. Like Nixon, Ed should have destroyed the tape but didn’t. Ed confesses and when Gordon pulls out a gun Ed shocks him with an electrical charge. It seems the chair was wired. Ed’s plan goes sideways when Jimbo comes to while being dragged to the car. Ed pulls out the pistol and plugs Gordon but Jimbo manages to get away after hearing Ed also confess to killing Kristen Kringle. It seems Nygma just doesn’t know how to shut up this week.

Jimbo, wounded as he is, manages to make his way to Selina’s place. He tells them he found out who framed him and then promptly passes out. Oh what to do, what to do? Gordon comes to in stately Wayne manor. Bruce not only called Alfred to help, it seems he stitched up Gordon’s wound. Damn, that kid’s becoming dead useful as he gets older. Gordon and Alfred have a chat while Bruce is out of the room and come to an agreement. It seems Alfred will help Gordon with his current predicament if Jimbo agrees to find out who ordered the Wayne murders. Once Bruce and Selina come back into the room the quartet hatch a plan to catch Nygma and clear Jimbo’s name.

Selina shows up at the precinct hollering about the reward for info on Gordon. She gets Capt. Barnes’ attention and points him in Gordon’s direction. Nygma also happens to hear this and goes into paranoid mode. He determines that he has to go and move Kringle’s body before Gordon can find it. Sure enough that’s where Gordon finds Ed, out in the forest digging up the evidence. Ed pulls out his trusty pistol again and, again, confesses to framing Gordon. Before he can pull the trigger Barnes, Bullock and just about every cop in the city descend on him. Having heard Ed confess, Barnes arrests him and Jimbo’s name is cleared. All is right with the world again – kind of.

Back in Barnes’ office the captain and Gordon discuss his returning to the job. Gordon says that before that can happen he has to find out who ordered the murder of the Waynes and that he needs the file on the case. Barnes will only consent to giving up the file if Jimbo agrees to give Lee Thompkins a call and patch things up. It seems the captain has the number to where she’s working down south. Well now Jimbo’s life this week is just full of little agreements it seems. Finally back in his own apartment Jimbo dials the number and lets it ring. As Lee’s voice comes on the other end there’s a knock at his door. I wonder, who could it be?

After helping out Gordon, Bruce and Alfred have a little chat. Alfred explains that Lucious Fox repaired Thomas Wayne’s busted computer. When Bruce starts to head for the entrance to the cave Alfred stops him saying that Selina could walk back into the room at any moment. When Bruce says that he trusts her, Alfred stops him again. He explains that Thomas Wayne was working in secret in order to protect the ones he loved. If Bruce includes Selina in his plans to battle the underworld it could very well put Selina in great danger. Bruce has to choose. When Selina shows up Bruce tells her that their time together is over. He thanks her for all she’s done, but Selina, obviously hurt, blows him off and exits stage right before Bruce can explain further.

Oswald’s having a rather difficult time of it now. While at the funeral grieving for the father that he just found –and lost– Oswald’s step family tells him that he needs to vacate the home that his father assured him would be his. It seems the step-folks are uncomfortable with an ex fellon ambling around the old homestead. Oswald pleads with them, saying that he has nowhere else to go. His stepmother, Grace, finally consents to let him stay but he’ll have to take over all the household chores, so she can fire the maid. When her children question her decision Grace tells them that it’s a temporary move. She predicts Oswald’s grief will overcome him and he’ll leave this cold, cruel world by his own hand. This definitely won’t turn out to be your average Cinderella tale. Hell, I don’t think Cinderella got treated as badly by her step-kin as Oswald is treated by Grace and her hellions.

Oswald puts up with the abuse for a while; they are providing a roof over his head after all. Then, while rummaging around for cherries to go in a drink for Grace, Oswald comes across the poison bottle of booze that killed his father. Testing it out on Grace’s dog, which keels over dead after lapping it from the saucer given him, Oswald realizes what happened. You can almost see the switch click on in Oswald’s head.

Grace has requested a roast for dinner and Oswald goes out of his way to provide her with two. She tries the first and pronounces it too tough. She tries the second and makes the same judgement. She then calls her two children down to dinner. Oswald does not seem to be very disappointed that Grace doesn’t find the meat to her liking. When she calls for Charles and Sasha to come to the table again Penguin lets her know that they’re already at the dinner table. Actually they’re ON the dinner table to be exact. It seems that Penguin’s already dispensed with his evil step-siblings and, rather than get rid of the bodies the old fashioned way, he served them up to their Mommy for the evening meal. “You thought they tasted the same,” Penguin tells her. “But Sasha,” he says licking his lips. “Definitely more tender!” Now before she can try the fava beans and the nice chianti that I’m sure he had for her to go along with the meat, Penguin tells Grace that he knows she killed his father. He then slits her throat with the carving knife. Bon Apetite!

Meanwhile over at Arkham, Barbara Kean, who’s only recently awakened from her long winter’s nap, the doctors called a coma, is now actively participating in group therapy. She tells the sympathetic little bunch, led by Professor Hugo Strange, all about how she murdered her parents and tried to off Lee Thompkins and Jim Gordon. All this makes her sad, she confesses, but not insane. Strange is intrigued by Barbie and when his assistant, Miss Perkins, suggests that Barbie should be a candidate for the same treatment they gave Penguin, Strange resists the idea. It seems he has different plans for the coy killer. The next time we see Babs she’s been put on a bus back to the city. Strange says he wants to see how she will act now out among the populace. Where’s the first place she goes now that she has this new-found freedom? Straight back to her old flame. Fortunately Jim Gordon hasn’t lost his ‘not happy to see her’ face.

If you thought things were getting better for Jim Gordon and happier for Penguin, well, you really don't know Gotham,...