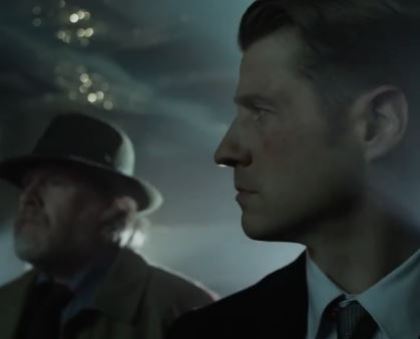 “And the last enemy to be destroyed is death.” Stealing a line from Harry Potter & The Deathly Hallows this episode opens as they put Mario Calvi into the ground. The weeping widow, Lee Thompkins, now Lee Calvi, and the grieving father, Carmine Falcone watch as the last words are uttered over the casket. Jim Gordon and Harvey Bullock watch from a distance but Falcone notices them. So, of course, when Gordon gets home there’s a message waiting for him, and a messenger to deliver it. Victor Zsasz tells Jimbo that Falcone will be putting a hit out on him shortly. Gordon requests a ‘sit down’ to explain. Mario was infected with the Tetch virus after all. Zsasz says that won’t be possible. The don is just too upset, and anyway this is just a courtesy ‘heads up’. “You won’t see me coming,” he tells Gordon. Before leaving though, Victor gives Gordon a thumbs up for taking out Mario. Seems that he wasn’t high on Victor’s list of favorite people.

Meanwhile duty calls. Gordon and Bullock catch a strange case in which a body turns up at the M.E’s office. The victim was found wondering the train tracks naked and died shortly afterward. There’s one small problem – this was the second time that the victim had died. In between deaths she appeared to have received a rather high dose of electricity. The first time she died, after being stabbed, she was taken to the morgue. From there she just disappeared. Shades of Indian Hill! On their way to the morgue Gordon and Bullock are interrupted by an obviously distraught Lee who requests that Gordon be arrested for the murder of her husband. Of course there’s a scene but Lucious Fox comes to Gordon’s aid, explaining that Mario was infected with the virus. Lee points out that Capt. Barnes was also infected but he’s alive and taking up space at Arkham. She then leaves in a huff telling Gordon that it’s not over.

At the morgue the detectives meet Dwight Pollard, the night manager. They inquire about the twice-dead victim but, of course, Dwight claims to know nothing about the situation. Gordon and Bullock decide to follow him and see what’s what. While this shapes up we witness a scene between Lee and Falcone where the don swears to kill Gordon.

Following Dwight leads Gordon and Bullock to a suspicious gathering where Dwight addresses the crowd and then plays them a video featuring the ‘late’ Jerome. Apparently Jerome has become a cult figure and Dwight wants to use this video to rile up the crowd. Before things get too out of hand the detectives break up the party and go off in pursuit of Dwight. They’re interrupted by Zsasz who’s now back to carry out his threat. Bullock chastises Jimbo for not letting him in on this little development before Gordon beats a hasty retreat. Zsasz and his two hit-girls chase Gordon in to a restaurant kitchen where Jimbo quickly dispatches the two women. He manages to get the drop on Zsasz and they tussle for a bit with Gordon getting the better end of it. He escapes leaving Zsasz with empty pistols. Meanwhile Lee visits Arkham to see Barnes. She wants to see how the virus is affecting him. Barnes proves to be completely out there where the buses don’t stop. He’s still on that rant about judging and executing well, everybody, but Gordon especially. Lee then begins to realize that all that talk about the effects of the virus is true. She goes and tells Falcone to call off the hit. He then confronts her with the fact that she’s still in love with Gordon. She doesn’t refute him.

Back at his apartment, Gordon prepares to take on Victor again when Bullock shows up carrying heavier fire power. Zsasz is right behind him and the fireworks commence. Just as things begin to get interesting Falcone shows up to call the whole thing off. When Gordon tries to apologize the don implies that it wasn’t his decision to leave Jimbo breathing.

Things seem to be looking up for Oswald. Crime is down, the economy is up and the press is there to congratulate him. Also, his deputy chief of staff is there to help him take the praise. Taking over for the still grieving Ed Nigma the deputy has also arranged a live interview with Margaret Hurst, one of Gotham’s top reporters. Promising to make Oswald a national figure, Hurst makes an appointment for the interview giving Oswald a few days to prepare. Things start to go downhill from there.

Back home trying to relax Oswald sees the ghost of his father, Elijah Van Dahl, wondering the halls. Said ghost pleads for Oswald to help him and then vanishes before Oswald can ask how. Shortly though we get an idea of what might be transpiring when the cops show up at the mayor’s door to inform him that his father’s body has been stolen form the cemetery. Needless to say this throws Oswald into a bit of a tizzy. Poor birdie. All this new stress and he still has to prepare for the interview. The ghost appears once more to Oswald telling him that someone is not to be trusted.

On the day of the interview Oswald discovers what the ghost is referring to when he finds his father’s decomposing remains hidden in the deputy chief of staff’s closet. When the man comes in and finds Oswald there, birdie snaps. He beats the poor devil to death with a sports trophy. Then, still somewhat rattled from the experience, he goes out to do the interview. Needless to say, Oswald’s performance in the interview goes about as well as trump’s performance during the first presidential debate. However Oswald cuts things short when he sees the ghost walking behind the crowd carrying the murder weapon. Upon returning to the dead man’s office he finds both bodies gone. Oh boy!

As Oswald’s on his way to the station to purchase a ticket to krazyville we find out what’s really going on. It seems that Ed Nygma has been spending all his time off grieving. He’s been conspiring with Tabitha and Barbara Kean to send Oswald over the edge. The ghost is actually someone Ed used to impersonate Elijah. The three plan to drive Oswald completely insane and then put him out of his misery. Sometimes revenge is just so complicated.

Last time we saw young Bruce Wayne, he Selina and Alfred were picking up a precious item that belonged to the Court of Owls. They had a bit of trouble getting away but were assisted by a mysterious stranger who turned out to be Selina’s mother Maria. It turns out that she came back, after an 11-year hiatus, to try to make things up to her little girl. Well, Selina isn’t having it. She gives Moms the cold shoulder. It’s only when Maria shows up at stately Wayne Manor and talks to Bruce that she starts to get any traction with her daughter. Bruce gets the two together and after a bit of conversation the ice melts and there’s a touching reunion between mother and daughter. Oh, by the way, during all this the crystal owl figure that the group stole from the Court, and Bruce hid in a room in Wayne manor is hit by sunlight. It casts a reflection in the shape of what appears to be some kind of diagram.

Once Selina and Maria return to Maria’s hotel room they find that they now have an uninvited visitor. Damn, the pesky visitors in this episode are about as welcome as reporters at a trump press conference. Anyway, this guy turns out to be someone Maria owes money to and he’s rather keen to get his cash. The gun in his hand proves this, and just for effect he shoves it right in Maria’s face. Selina promises that she can get the money for him and when he finds out that she knows Bruce Wayne his demeanor takes a slightly less menacing tone. There’s probably a whole lot of no good that’s gonna come out of this.

As the episode ends we follow Dwight to a dark chamber. He discusses plans for his process to reanimate the dead. Further exploration of the chamber shows that it contains several of what appear to be cryo-tubes. One of these tubes contains the frozen body of Jerome. It seems that the Joker might be making an appearance in Gotham after all.
—
‘I hear my train a comin.’
– Jimi Hendrix