Gotham Recap: “Look Into My Eyes” 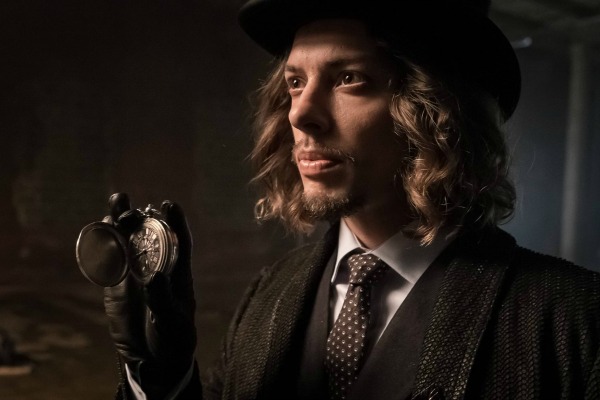 Well, it seems that things are rolling right along in the fair city of Gotham. Young Bruce Wayne and his trusty manservant Alfred entertain a somewhat familiar houseguest. Oswald Cobblepot, aka Penguin, makes a grab for political power while helping a pal out of a confining situation. Jim Gordon is reunited with the ex love of his life and all her new baggage. And straight through the looking glass emerges a new villain with whom the people of Gotham will have to contend. So, let’s not waste anymore time waiting to open up this steaming vat of krazy.

It seems that Barbara Keane and Tabitha Galavan actually have a knack for running this new club of theirs. They’ve got a packed house and the patrons are enthralled with the current headlining act, a talented hypnotist and magician, Jervis Tetch (Benedict Samuel). Those familiar with the Dark Knight mythology will recognize the given name of the Mad Hatter. This version of the classic villain portrays him as not quite having gone round the twist, but he’s definitely on a runaway train headed in that direction. Tetch is an opportunist. Spotting a young couple of some apparent means in the audience Tetch calls up the husband, a doctor, hypnotizes him and has him perform extraordinary feats. Unseen by the crowd, Tetch also suggests to the doctor that the young couple should have him as a house guest. The tricks Tetch has his subject perform amaze the crowd and Babs and Tabby are more than pleased with his performance. Later Tetch shows up at the young couple’s posh digs rousing the good doctor out of bed to answer the door. Uttering the phrase that puts the young M.D. back into a trance, Tetch has him quickly dispatch his wife with a fireplace poker and then do away with himself as well. Tetch is now the lord of the manor, and he’s just getting started.

Mayor Aubrey James is holding a press conference announcing plans to take his old job back from the control board currently running the city. Things hit a bit of a snag when Penguin shows up to steal the show, and steal it he does. In a manner that would make donald chump envious, Oswald commands the attention of the press and describes how he saved the city from Fish Mooney and her band of freaks. He then goes on to say that there’s no one who has the strength to run the city better than him. Oswald then formally announces his intention to run for mayor. The crowd of minions who accompanied him break into wild cheers. Not to be outdone, James later requests to meet Oswald in a crowded restaurant. When Penguin shows up for the meeting James shows that he won’t be bullied. As they converse, and things begin to get confrontational, five or six gun-toting thugs appear and surround Penguin. James, it appears, knows something about wielding power and he’s not ready to give it up. Penguin, not one to be outdone, doesn’t appear to have his feathers ruffled by these sudden new developments, and no wonder. He makes a slight gesture and the entire crowd of diners in the joint break off their repast, raise their guns and draw down on James and his gang. There is, after all, something to be said for a well-armed citizenry. Once again Oswald and his minions prove they will not be denied. After all Oswald wants to “Make Gotham safe again.”

When we last saw Bruce Wayne he and Alfred had just discovered the Bruce Wayne clone, who escaped from Indian Hill, standing in the library at stately Wayne manor. He saw Bruce with Selina and then found out where Bruce lived. Alfred wants nothing more than to see the back of him right away but Bruce decides to take pity on clone-boy and have him as a house guest. He says that his name is Five. The next morning Five walks in on Bruce and Alfred during a boxing lesson. When Bruce suggests that Five put on some gloves and have a lesson with Alfred, the boy agrees. Alfred takes it easy at first but Five exhibits surprising agility, speed, reflexes and power. In other words he clocks Alfred a good one to the head – twice. Surprise, surprise! Later on Selina shows up and she’s pretty broken up about what happened to her friend Ivy Pepper. When Bruce tries to comfort her she suggests that they hop in one of his cars and go scour the city looking for Ivy. Bruce tries to gently refuse her request, he still has the situation with clone-boy to deal with, something he doesn’t mention to Selina. Taking this as a cold rebuke of her request Selina tells Bruce she thinks he’s selfish. She then takes herself and her hurt feelings out the door before Bruce can attempt to smooth things over. Meanwhile Five has been observing the situation from behind a partially closed door.

Jim Gordon wakes up to find Valerie Vale dressed and heading out the door of his apartment. When he suggests breakfast she passes saying that she has work to do. She then leaves a befuddled Jimbo who was apparently expecting things to go a bit further than they did. When Gordon shows up at the precinct to collect his bounty for rounding up what appears to be the last of the Indian Hill escapees he gets a bit of a surprise. Lee Thompkins is back, still looking fine as May wine, and Barnes has given her her job back. And, oh yeah, she’s engaged. Talk about a COLD slap in the face. As luck would have it, Jimbo later crosses paths with Jervis Tetch and not by chance. Tetch throws Gordon a big wad of cash and says that he wants Jimbo to find his sister Alice (Naian González Norvind). Tetch tells Gordon that Alice was in Indian Hill due to a rare condition that causes her blood to be poisonous. Due to the breakout, Tetch assumes that Alice is currently out among the populace. He just wants her back.

Alice is indeed in Gotham and it seems that she’s having a bit of a time making ends meet. Her landlord shows up to collect the rent and when she tells him she doesn’t have it he, of course, suggests other means of settling up. When he advances on her she slaps him and then he pops her in the mouth bloodying her lip. When he tries to kiss her he gets some of her blood on him and he immediately seems to go mad. That Karma, it’s something ain’t it.

Gordon gets the lowdown on Alice from Selina in return for a promise that he’ll keep an eye out for Ivy in his travels. When Jimbo arrives at the bar where Selina says Alice is working he finds the joint burnt to a crisp and the owner, yet another deplorable type, in a foul mood. It seems Alice spilled some blood on a counter and then set fire to the joint. After an exchange of words and a small bit of information things escalate into fisticuffs. Gordon wins the day but not before receiving a gash on the back of his head that sends him to the ER where he meets none other than Lee’s new fiancee, Mario (James Carpinello). They exchange pleasantries and Gordon manages to remain civil. He even manages to ask about Alice. She did incur a burn or two when she torched her former place of employment. Gordon finds Alice’s apartment and discovers the landlord locked in the closet. Upon releasing the guy he attacks Gordon in a fit of madness. Before he can do much damage the man is shot to death by Alice. Gordon tells her that Tetch sent him to find her and this news does nothing to raise her spirits. After making sure Gordon has none of the landlord’s blood on him Alice torches the body and makes a hasty exit stage left.

Gordon meets with Tetch to inform him of the happenings with Alice. He also mentions that this may be a situation for the cops to handle, cause of the arson and the dead landlord and all. Tetch doesn’t take kindly to this suggestion. Conveniently they have adjourned to the roof of the building where they met and Teach puts the hypno-whammy on Gordon and has him stand on the edge of the roof looking at the loooong way down. Oh, but just in the nick of time Alice shows up to save the day, and Jimbo’s ass as well. Using the gun Tetch had Gordon throw down and yelling about how evil he is, Alice shoots Tetch and then pulls Gordon off the ledge. Tetch manages to get away though. Gordon then slaps the cuffs on Alice. No good deed goes unpunished after all.

In a little aside scene we find Lee and Mario at dinner when they encounter an small interruption, Mario’s father – Carmine Falcone. That Lee Thompkins she sure can pick ‘em can’t she? Seems that Mario is the good sheep in the family and the don has kept him far away from the family business. Wonder how long that’s gonna last now?

Deciding that he may need a bit more help with his campaign Oswald goes to seek it – at Arkham. After a short and slightly threatening conversation with the current administrator Oswald manages to secure the release of a much-valued associate, Edward Nigma.

After witnessing the exchange between Bruce and Selina, Five alters his appearance to look more like Bruce. He then absconds with a car from the Wayne garage. When Bruce discovers this he decides that they have to find the boy but where to look? Well, from all indications it looks like Five has a bit of a crush. Pretending to be Bruce he rolls up on Selina and offers her a ride.

Things are looking ominous all over. Oh my!

Young Bruce Wayne is taken hostage yet again on Gotham. His captivity is short-lived, but the ransom was rather costly.