Even though all signs pointed to him, we learned that Lucas is sadly not A.D. Well, he still could be, but if so he’s very good at lying about it. Speaking of someone else who is good at lying: Aria. We know she’s not that sneaky after almost being caught by Emily. It’s about time for the hood to drop, and for Aria to be revealed. 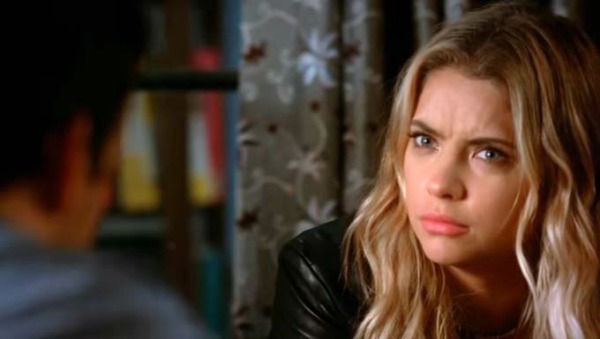 When Aria isn’t busy being A.D.’s lacky, she’s finally throwing herself into wedding preparations or at least dancing lessons. Ezra signed them up for dance classes but Aria is distracted with A.D. looming over her head. She misses three calls from the hooded menace and we all know that’s not good. When she’s alone, Aria learns that A.D. has the police report she filled out but never filed on Ezra while he was still her teacher. Because there’s no statute of limitation, if police go ahold of the letter, Aria might be having a Jailhouse Rock-themed wedding.

Mona however wiggles her way into the Liars’ fold as she convinces Emily to go to the doctor who impregnated Ali. They waltz into the doctor’s office as a nice lesbian couple, but quickly press him for answers. He forces them to leave and Emily thinks they failed. Lucky for her she has Mona who swiped a magazine with the doctor’s address. After going through his mail, they find evidence to confront him again. Backed into a corner, the doctor said there was never a name but he did give them an I.D. number. We’re actually taking baby steps… to get to the truth of this pregnancy.

While Aria is planning a wedding, Spencer’s parents are about to plan a divorce thanks to Aria. She brings the Hastings takeout as they’re packing their home. However, while doing so, she sneaks a cell phone connected to their home bluetooth system into a box and quickly leaves. Out of nowhere, a recorded conversation between Mary Drake and Mr. Hastings echoes through the house. They’re talking about Jessica’s murder and how papa H and Jessica were planning to do the same to Mary. Of course he freaks out and tries to find the source of the recording but fails.

Spencer’s night doesn’t get much better as she comes face-to-face with Marco later. He asks Spencer if she was ever interested in him or if she was just using him because she “needed a cop in her corner.” Spencer bites back saying if he needs her for a real conversation, they can talk in the interrogation room.

Spencer starts to drive away when Mary Drake pops out of the backseat of the car and tells her to drive in a killer-esq voice. They find their way to the Lost Woods Resort yet again and Spencer confronts Mary about the phone. Mary said she had nothing to do with it,  but she’s glad Spencer heard everything. In a flashback, we learn the root of the argument and the death of Jessica was around Mary wanting to see Spencer. When Mr. H and Jessica wouldn’t let her, she gave the pills meant to kill her to Jessica and the rest is history.

History will repeat itself as Spencer comes home to her parents reading the letter Mary wrote her. Her father goes into another spiel on how manipulative Mary is and that he was just protecting Spencer from a sociopath. In the middle of all this, Mrs. H reveals they won’t be moving and she plans to give up her senate seat. With everything going on, she doesn’t want to take a chance that this job she fought so hard to get, could be taken away from her all because of her husband’s crimes. Ugh, Mrs. H is a saint.

Checking in on Hanna and Caleb, the two sat down with mama Marin as Caleb bared his soul to her. He tells Mrs. Marin he can’t image life without Hanna and says,“I want to marry your daughter, Mrs. Marin. No bells and whistles: Just the two of us exchanging vows.” Swoon.

In Ezra’s apartment with our first engaged Liar, Aria wakes up to message from A.D. that says “You’ve waited long enough. Your reward is downstairs at The Brew.” She quickly rushes downstairs and finds an envelope with puzzle pieces and a note that reads, “CONNECT THIS. YOU’RE ALMOST THERE.”

Bummed it wasn’t the police report, Aria still goes to connect the pieces to the game. There, she gets another message saying her grand prize is behind her. When she turns, it’s the police report in all it’s glory. For once A.D. kept its word.

Now, Aria didn’t do a great job being inconspicuous in the coffee shop because from the counter, Mona witnessed the whole “seek-and-find.” This begs the question, could she be A.D. or could she be onto Aria? My money is on the latter, because later that night, we get a peek inside Mona’s lair where the walls are covered in documents, newspaper clippings and even maps of the board game like she’s trying to solve a mystery.

She’s either a true friend or a true foe of the Liars — only time will show her true intentions.

Who is A.D.? I really don’t believe it’s Mona or Lucas anymore, so I’m really stumped.

Pretty Little Liars Recap: “The Glove That Rocks The Cradle”

All the Liars are hanging by a thread now that Marco is hot on their trail. But Spencer? Well, Spencer’s...