Well this season is coming to a close but, surprise surprise, things appear to be heating up in Gotham – literally, especially when plans go awry. Read more in Special Contributor Ralph S. latest recap.   – David F. 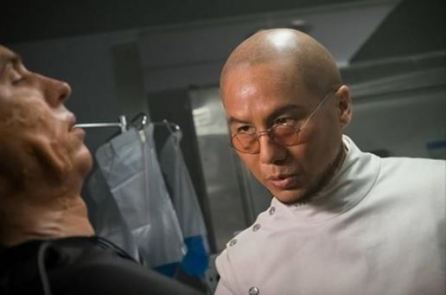 Last week we left Selina Kyle in a bit of a fix. She broke into Arkham Asylum in order to rescue her pal Bridgit Pike only to find that Hugo Strange had turned Bridgit, who had a small fascination with fire, into a full blown psycho with a flame thrower. He also gave Bridgit a new name – Firefly. This week’s episode finds Selina facing the business end of Firefly’s flame stick and trying to escape becoming kindling. Firefly does singe Selina’s jeans a bit but Selina manages escapes; she can only go so far,  however because Strange locked them both in a fireproof room.

Now anyone who follows the show knows that Selina is an extremely resourceful character. She is more than capable of battling her way out of most situations and if combat isn’t an option she has the ability to talk her way out of trouble. This time she has to choose option two. It seems that a new name isn’t all that Strange has given Bridgit, he’s also given her the illusion that she’s some kind of fire goddess. He’s also just about wiped out her memory — a side effect of the process he uses to bring folk back from the dead. “Someone sure scrambled your eggs,” Selina tells Bridgit. Selina does manage to jog some small part of her friend’s memory when she gets Bridgit to recall her brothers and what happened to them. Selina then manages to use Bridgit’s god complex to her advantage. She convinces Firefly that every goddess should have a servant and she readily volunteers to become the fire-freak’s servant. This seems to appeal to the pyro’s sense of megalomania and she agrees to spare Selina from a french fry fate in order to serve her. Well, Selina has assured her spot in next week’s season finale. How about everybody else?

Young Bruce Wayne is suffering some serious guilt because he suggested that Selina go to Arkham to help Bridgit. She didn’t return and now Bruce is climbing the walls at stately Wayne manor. Alfred doesn’t really do much to ease his young charge’s troubled mind. Instead of offering a shoulder to lean on Alfred reads Bruce the riot act for getting Selina involved in this situation. Rather then continuing to listen to the butler saying ‘I told ya so’, Bruce decides to get off his ass and do something. Enlisting the aid of Jim Gordon and Lucious Fox they hatch a plan. The intent is for Bruce and Fox to enter Arkham under the guise of getting a tour from Hugo Strange. This seems doable because the Wayne Foundation contributes a sizable amount of money to the asylum’s operating budget. They’ll smuggle Gordon in, who’ll be dressed as a guard — he did work there as guard for a short time last season after all. While Bruce and Fox distract Strange, Gordon will find Selina and get her out of there. If things go wrong, Alfred will notify Harvey Bullock, who’s now running the police department since Capt. Barnes is still out of commission and Jimbo still hasn’t reclaimed his detective shield. Bullock will then come riding to the rescue with the strike team. Sounds like a good plan right? Not so much.

Strange, being the diabolical bastard that he is, sees through this charade and is ready for them. He appears to cooperate with them long enough for Gordon to get into the building and, aided by Fox, find the entrance to the Indian Hill facility where Selina and Firefly are. Before Gordon can do anything, Strange, who is having tea with Bruce, springs the trap. Gordon is apprehended by Strange’s guards and goons while Strange turns Bruce and Fox over to his new associate Edward Nygma. It seems Ed, who was on the evil doctor’s list for trying to escape, managed to work his way off said list by promising to help Strange outwit Gordon. Strange has now assigned Ed the task of finding out how much about Indian Hill Bruce and Fox know. Nygma locks the two would-be sleuths in a room and threatens them with poison gas if they don’t start talking. This seems to be a bit a a predicament but Bruce doesn’t seem to troubled, he seems to be figuring things out. Guess we’ll find out what he has planned next week.

Meanwhile Strange has other plans for good ole’ Jimbo. He has Gordon strapped into a chair and places a device that resembles a crock pot over his head to which a formula of some sort is added. After a few ticks the crock pot is taken of Gordon’s head and placed on that of one of Strange’s newly ‘reinvigorated’ subjects. The crock pot vibrates and smokes a bit. When it’s removed from the subject’s head he looks exactly like Gordon. This should make things rather interesting, since Alfred, alarmed that the trio hasn’t contacted him, has sent Bullock and the strike team speeding off to Arkham to the rescue. Everything’s now in place for the season finale.

Oh yeah, just a couple more small things that should be brought to your attention. First, it seems that there is someone pulling little Hugo’s strings. Some little old lady who wears a mask and has hair as bad as Donald Trumps contacts Strange and orders him to shut down the Indian Hill experiments. She’s not pleased with the way things are going. Strange doesn’t like that, not one bit. You see, he did have a great deal of success with the last subject he brought back form the dead. He altered the subject’s DNA and fiddled with the voltage amount used in the process.

The subject was Fish Mooney. Yeah, she’s baaaack! Now it seems she also has the ability to get people to do her bidding just by touching them. This will certainly add an extra bit of spice to the mix now won’t it.

Tune in next week to find out how all this shakes out. Same Bat-time, same Bat-channel!

The unholy angel of death is leaving a bloody wake in Gotham and this week he finds out who his...