On Bates Motel Norman tries to bond with his mother and show her that he’s okay. Alex and Dylan become allies; Rebecca Howard gets embarrassed in front of the DEA. More on the twists and chills on Bates in Special Contributor Tracey M.’s latest recap. – David F. 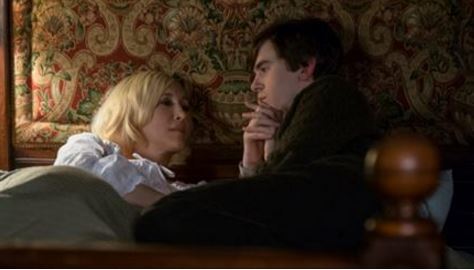 It’s morning in the Bates household. Norma and Alex have their breakfast coffee and Norma says she’s optimistic that Norman can progress with his therapy as an outpatient. He’ll eventually accept having  Alex live with them, too. Is that an Irish coffee, Norma? Your son doesn’t seem too keen on change and you’re not that convincing. Alex is worried that Norman could hurt his mother, but she’s sure he won’t. She knows her son. She’s painfully encouraging as she tries to weave Norman back into her life while staying married to  Alex. They share a “have-a-good-day kiss,” and feel Norman’s icy glare. He’s frozen at the top of the stairs. He’s making me uneasy, I think he needs to be locked away again.

Norma drives Norman to Pineview for therapy with Dr. Edwards. In the car, Norma suggests that they all put up the Christmas decorations. Maybe it will help him get to know Alex. While in therapy, Norman tells Dr. Edwards exactly what he thinks about Alex being with his mother. He’s ranting and pacing, getting louder. He says that Alex took advantage of Norma’s loneliness. He goes on to say that she can be quite difficult to live with. She’ll begin to criticize her new spouse, to the point of driving him away and Norman says he’ll be the one to pick up the pieces, as usual. Every week, Norman reaches a new level of crazy. This week he’s the concerned caregiver, making Norma out to be the one who’s a mess. Well she is, but this is your session, Norman. Norman’s cocky and flippant, interrupting Dr. Edwards with what he thinks needs to happen. I wonder if Dr. Edwards has some kind of defense weapon in his office… I’m just saying. Norma is on her cell outside, checking in with Alex. He tries to convince Norma that her son belongs in the hospital. That boy ain’t right! Norma is upset, telling  Alex he isn’t even giving her son a chance, and she knows him best. On the ride back from Pineview, Norman puts on the charm, trying to make his mother smile.

Elsewhere, Rebecca Howard is being questioned by the DEA. They believe Alex murdered Bob Paris and want her to wear a wire and get his confession in exchange for leniency, which isn’t as great as getting the hell out of town.

A wired Rebecca meets Alex at the diner and tries to get him to reminisce about Bob. She flirts and peppers him with questions, but Alex plays dumb,then speaks directly into Rebecca’s blouse, telling the DEA their time could be better spent. Alex is one cool cat! Nestor Carbonell continues to develop the character of Alex, adding more depth and feeling as he slowly reveals Alex’s true heart.

Emma and Dylan are doing some last minute packing, but Dylan looks pale and uneasy. Alex calls Dylan and asks that they meet for coffee to discuss Norman. Alex expresses his concern about Norman being out of Pineview; he’s scared for Norma and asks Dylan if he’s ever seen Norman be violent. Dylan has, and he also worries about Norman being out of the hospital so soon. That explains why Dylan’s been so pale. It’s cold fear. Dylan agrees to help Alex have Norman legally committed. It’s required that at least two family members sign the request.

The next morning, Dylan takes a ride over to Bates Manor to speak with Norma. Dylan has Audrey Decody’s earring. He found it in Norman’s room. Dylan knows it’s not Norma’s. He has to chase Norma around the house as she tries to avoid the conversation. She’s scared of what that earring might mean. Dylan shouts at Norma, trying to make her realize how sick the situation is, how dangerous Norman is. Even Norman knows something’s wrong, but he’s acting “normal”.  Dylan tells his mother he has to leave town, get away from her and Norman and start his life with Emma. He’s done all he can. Norma chases Dylan down the walkway, screaming his name. He has the earing in his pocket and she wants it back. Norman comes out of the motel office when he hears all the commotion. Dylan roughly embraces Norman, begging him to please admit that he’s not okay and get help. Norman’s confused, asking his mom what’s going on as Dylan peels out for good.

He asks her what happened. She says that Dylan thinks he should be back in Pineview. Norman asks if Alex feels the same way. She admits that he does, but she’ll handle it. Norman turns on the charm and the two share quite the creepy moment.

Later, Norma angrily marches into the police station, getting in Alex’s face about wanting Norman to be in  the hospital. Norma defends Norman, daring Alex to presume to know anything about her son. Look lady, he knows all he needs to know, and has seen all he needs to see.

Norman is in the attic rummaging around, and he finds a dirty suitcase full of moldy, bloody clothes and locks of hair. He examines each item closely, then decides, what the hell, I might as well put this moldy jacket on. Seeing his reflection in a old mirror freaks him out. What did ya do, Norman? He hurries outside and  buries the items before mom gets back. She comes home upset, and tells Norman he was right. She and Alex aren’t going to work out. Norman says he’s sorry. Norma opens the fridge, but is doubled over by a tidal wave of grief. She loves Alex. I feel her anger and frustration, the sorrow, the loneliness, and the love for her son with each sob. I’m tearing up, too.

Norman tries his best to comfort her. In her room, she writes a note to Alex, letting him know she will always love him, putting her rings inside the envelope. Norma sits in her bed and cries like a baby. Here I go again! Norman comes to check on her, and she asks him to come in. They sit against the headboard chatting like an old married couple. Norman says they ought to leave and start over in a new town. They could go to Oahu, like they always dreamed. Norman gets his mother to smile, then laugh. He says everything will be okay as long as they are always together.  Norman sings sweetly to his mother, lulling her to sleep. He kisses the top of her head and turns out the bedside lamp. He watches Norma sleep for a long while, then sneaks out of her room. My creep meter is going crazy right now.

The son heads down to the cellar, and lights the furnace. He methodically goes to every vent in the house, and closes them all, except for the one under Norma’s bed, where he lays with his arm around her, ready for eternal sleep. Is he even Norman right now? Alex is compelled to stop by and check on Norma. He uses his key after getting no answer. He steps into the dark house calling for Norma, but there’s only silence. He runs upstairs to Norma’s room where she and Norman lay, unconscious. Alex breaks the window to let fresh air in and carries Norma out into the hall. He carries Norman out as well. Personally, I might pull Norman out – perhaps just a bit too late – whoops!  Alex tries CPR on Norma but she’s not responding. Alex sobs, screaming her name, refusing to give up, and once again I’m crying. Of course, Norman coughs and regains consciousness. He looks over and sees Alex crying over Norma. Excellent job this season, Nestor Carbonell. He broke my heart and he made me cry. I hope this isn’t the end for Norma! I’m with Alex, I’m not ready to say goodbye.

On Bates Motel, Alex moves out while Norman settles in back at home. Norma tries to find a happy medium;...