Drama is always the order of the day for the posh denizens of Downton Abbey, but there is one family member who lives a charmed life and rarely has cause for upset and that’s Lady Mary Crawley. But in a stunning turn of events, the heiress recently had a genuinely upsetting day.  A Downton insider tells all about the unusual event. 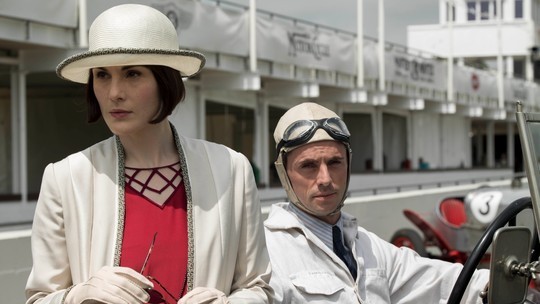 It’s no secret that every eligible chap in England is enchanted by the high-born beauty; her latest suitor is race car driver Henry Talbot. Lady Mary is not keen on cars, which is understandable since her husband, Matthew Crawley died in a 1921 motor accident—allegedly. (There have been rumors Matthew Crawley tired of life at Downton Abbey and snuck off to Hollywood, but he hasn’t been seen since.) Somehow Lady Mary gave in and accepted Henry’s invitation to watch him race at the Brooklands circuit. Our source says: “It’s unthinkable that anyone would press Lady Mary to do something she’s not interested in, that’s now how it works around here. The Crawley’s all went to the race though.”

The day started off with a dire omen. Lady Edith, the Crawley’s unfavorite daughter, has been suspiciously upbeat lately. The source notes: “Mary’s sister has always been known as “Poor Edith.” On the day of the race, Edith showed up with her employee, Laura Edmunds. Since when has Edith had friends and a social life? The universe is out of whack.”

There was a tragedy on the track, it looked like Henry may have died in a firey crash but actuality, it was his friend Charlie. The source says:  “Charlie’s death not only forced Mary to remember sad times but then Henry was in a bad mood and turned down the chance to have dinner with the Crawleys because he had to go comfort Charlie’s family. He really should have had his arms wrapped around Mary for the rest of the night, but instead he was distracted and thinking about other people. Mary was wearing a to-die-for red frock; he must be stark raving mad. Maybe it was the shock of losing his friend on the track. To make matters worse, the rest of the Crawleys didn’t spend much time focusing on Mary. When Lady Edith’s beau died, the family shrugged it off because Mary had just bobbed her hair. That’s how it’s always been.”

By the end of the evening, Lady Mary was back in the, pardon the pun, driver’s seat. Our snitch reveals: “Naturally, Henry soon remembered that the universe revolves around Lady Mary—as well it should—and he phoned her after dinner to make sure that she knows he’s madly in love with her. Mary broke up with him. She may have had a bad day but she still knows how to crush a man’s heart under her heel, even if he has just lost his friend. Look, Henry’s just lucky he didn’t die in her bed. She did seem kind of sad about breaking up with Henry, but it was a long day so it’s probably no cause for alarm. Lady Mary will be just fine.”

Downton Abbey airs at Sundays at 9/8c on PBS Masterpiece.

The Crawleys Evicted from Downton Abbey

Another day, another Crawley family drama. In an exclusive interview, Downton Abbey, the Crawley's ancestral home, says there is friction...