Shit just got real. Or, to put it another way, this is the first installment of Feud that features an event that undeniably happened.

Up until now, the fireworks have all been of the “may have” and “was rumored to” variety, but it’s really, really true that—snubbed by the Academy for an Oscar nomination (Bette and Joan had shared lead billing in Whatever Happened to Baby Jane?, making both eligible for the “Best Actress” honor)—Joan campaigned not only to be a presenter, but to accept the award for any Best Actress nominee who could not attend. Touché! 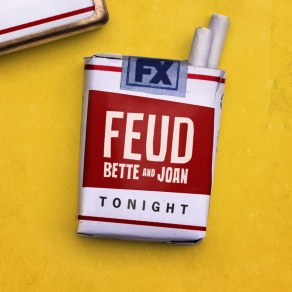 Naturally, Feud frames this stealth maneuver as a solely anti-Bette gesture (although whether Crawford actively tried to keep Davis from winning is unsubstantiated). Personally, I think Battleship Joan was aiming her torpedoes at a larger target—the industry in general. “They can refuse to acknowledge me,” one can almost hear her thinking, “but by God, my ass will be on that stage and holding that award!” And if it happened to put a thorn in Bette’s side in the process, even better!  Whichever scenario you believe, Feud makes delicious fun of speculating.

Re-enter ubiquitous lizard Hedda Hopper, to help Joan hatch the Great Oscars Siege Hedda’s out for herself, as usual, but Feud teases us with occasional hints of a genuine bond between the two women. (Can I just stop for one moment to mention that Hedda must have been an adroit gate-climber, as she spends a LOT of time showing up unannounced at Joan’s front door?) Anyway, their diabolical plan goes without a hitch; Like clockwork, Anne Bancroft takes the bait and agrees to let Joan accept for her, then wins the Oscar, and presto! There’s Joan, breezing by a sucker-punched Davis on her way to the stage, resplendent in silver gown, silver hair, silver everything, as if she herself is an award.

Note: There’s a tracking shot to die for in this sequence that follows Joan in a circle as she leaves the stage from presenting Best Director, escorts him offstage and deposits him in the green room and without ever stopping, continues right back to the stage to accept for Best Actress, as the orchestra bleats out a version of “Mocking Bird” that sounds for all the world like it was arranged to drive Bette Davis insane. It’s a visually simple sequence, but unexpected. And quietly masterful.

A beaming Crawford delivers Bancroft’s acceptance speech and poses with the other winners, indistinguishable from them—radiant, triumphant. The newsreels, the morning paper, all show Crawford clutching the Best Actress Oscar. For all practical purposes, the winner. Yes, there’s nothing quite like skullduggery to balance the scales of justice! Score one for Joan. Davis (we can only assume) vows nicotine-stained revenge.

But hurry, Bette. You’ve only got three episodes left!

Highlight: Susan Sarandon reenacting Bette's TV appearance on The Andy Williams Show in which she sings a camp "theme song"...