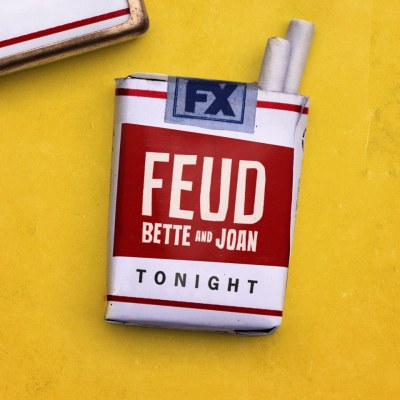 This installment continues to track both the progress of the Whatever Happened to Baby Jane? shoot, and the levels of admiration and antagonism Bette Davis and Joan Crawford feel for each other–both rising in equal measure like twin thermometers. Gossip columnist Hedda Hopper is shown goading each star toward public slander of the other. She, after all, has papers to sell (Judy Davis’ over the top performance is deliciously cartoonish. And I don’t think it’s by accident that the costume designer has fashioned some of her hats to resemble a vulture). Crawford is shown trying to resist “being small”, but Hopper eventually wears her down. Bette Davis, on the other hand, sees through Hopper’s hyena-like motives. In one of Susan Sarandon’s better scenes this week, Bette refuses to badmouth Crawford and opts to tell Hopper exactly what she thinks of HER: “Joan’s an institution? She BELONGS in one if she thinks YOU’RE her friend!”

It’s a satisfying moment–not unlike seeing a kid suddenly defend the sister she’s always teasing. And it comes close, I think, to the heart of Feud, which is that underneath it all, we aren’t supposed to believe these two women hate each other. But, like Scarlett and Rhett in Gone With the Wind, they just can never seem to meet when they both have their defenses down at the same time, which creates a tension that is sometimes fun and sometimes exasperating.

Other plot points–Bette gets director Aldrich to give her talent-free daughter. B.D., a small role as the neighbor’s daughter, and much is made of B.D.’s inability to act. In the real-life version of the movie, she is not that bad—B-movie-ish, perhaps, but not atrocious as in Feud. Joan wears falsies for her dying scene on the beach and keeps sneaking into her trailer to make herself look younger when the scene calls for her to be corpse-like. Jack Warner (Stanley Tucci) orders retakes (“every time they cut back to her, she looks like she’s getting better! It’s like fucking ‘Camille’ in reverse!”)

Joan is shown with her twin daughters Cathy and Cynthia, struggling with whether to send flowers and a note to eldest daughter Christina (future author of THAT book) for her debut in a play. It’s a scene meant to indicate the strain that existed between mother and daughter and restores a handful of shades to the “Tom and Jerry”-like caricatures outlined in Christina’s memoir Mommie Dearest. I have to give Feud points for this.

On the whole, Lange is much more consistent in her characterization of Crawford than Sarandon, who is all over the map in this episode. It’s as if she’s thrown, to a degree, by the dialect–as if not being able to speak in her voice is somehow so distracting that it disrupts her very ability to deliver a solid character. From line to line, she seems to struggle with whether to try for the voice, to ignore it altogether, or just to switch to concentrating on the famous facial tics instead. I like Susan Sarandon as an actress, but it appears that she needs to play “herself as….” to feel the role. A mimic, she ain’t.

Still, Sarandon looks great; it’s fun to watch her flounce around and reenact scenes from Baby Jane”(sometimes flawlessly, sometimes WTF-ishly), and to paraphrase one of her own lines to Crawford, in the pilot: When she’s good, dammit, she’s good. But I don’t see an Emmy nomination in her future. Lange, maybe….

Feud: Bette and Joan — “The Other Woman”

The second installment of FX's Feud continues the writer's (seeming) purpose to clarify that the famous feud with Bette Davis...