On this week’s Bates Motel, Julian and Norman sow some wild oats; Alex woos his new bride; and Emma and Dylan grow closer. Check out Special Contributor Tracey M. ‘s latest recap for more on what’s going on at the Bates. – David F. 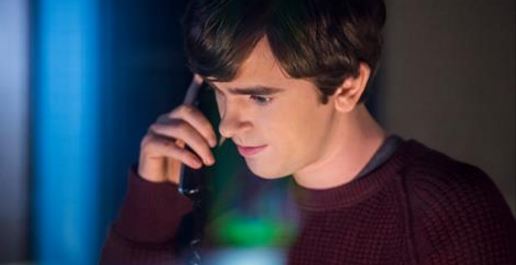 Uh-oh, Norman’s not taking his meds. He’s doing the ol’ finger down the throat as soon as he’s alone. He’s under the impression that he’ll be released soon; there’s no reason to hold him at Pineview. He made it pretty clear to Dr. Edwards that Norma’s the dangerous one. He needs to be released so he can help her. He’s become cocky and uncooperative, refusing to go to group, insisting he is leaving. He starts to get loud, and Dr. Edwards escorts him to his office. He sits Norman down and explains that Norman’s accusations must be investigated before any decisions on his admission can be made. Norman storms off to group therapy like a petulant child. Later, he asks his new friend Julian if there is anywhere he can make a private call. When he does, Norman calls Dylan, telling him Norma is in trouble, and the police may be coming out to question the her. Norman is agitated, and forced to hang up before being discovered.

The next morning, Alex finds Norma in the kitchen with breakfast and fresh coffee for him. They both have no regrets about consummating their “marriage”. They embrace, but Norma is still a little skittish around her new husband. Alex recommends that they open a joint bank account, and make an appearance together at the town’s Winter Festival later that evening. Norma regrets she can’t go with, she’s heading to Portland to visit Emma. As she sits in her car, she smiles thinking of Alex. She’s got that morning-after glow. Norma’s smile is like the sun breaking through the clouds.

Dylan and Emma are spending time together on the hospital roof. Emma says she and her father have decided to move to Seattle. They have a cutting-edge respiratory center and college for Emma. She asks Dylan if he would consider coming along. He says he will if that’s what she wants. It is. Max Thieriot does an amazing job as Dylan. He has captured the sensitivity of his father, Caleb. He’s soft spoken, gentle and sincere, but no one to mess with. As the series moves forward, I’m looking forward to seeing his character continue to grow. Unless, of course, Norman has other plans for him.

Norma visits with Emma, and tells her Norman has been hospitalized. Emma says it’s probably for the best. Probably? C’mon Emma, remember being alone with him in the cabin?? She encourages Norma to take this time for herself; give herself permission to relax a bit (without the suffocating reality of being Norman’s mother). Wise girl, that Emma.

Norma returns home sooner than expected and surprises Alex at the Winter Festival, looking radiant. The center of town is covered in tiny white lights, and there are lighted parasols for the ladies. The newlyweds grab funnel cakes and whiskey-laden hot toddies. Alex is called away for a photo and Rebecca Hamilton (Jaime Ray Newman) swoops in and introduces herself. Norma says that she and Alex will be stopping by the bank soon to open a joint account. Rebecca is clearly not happy for the newlyweds. Alex must have been more than just a booty-call for her. Later, Alex and Norma dance under the lights. Norma wants to know who Rebecca is, but Alex brushes her off as just his banker.This episode gives Nestor Carbonell a chance to show more depth to Alex’s character. He’s in love now and vulnerable, but still very aware of what’s going on behind the scenes. Some of the dirty dealings in White Pine Bay are starting to complicate his life.

The next day, Alex stops by the bank after an urgent message from Rebecca. She wants to know what happened to Bob Paris. She flat-out asks Alex if he killed Bob. He denies knowing anything about that. He did, however, annihilate Bob with four rapid shots from groin to throat. Rebecca says the DEA has been sniffing around Bob Paris’ accounts and notes that Paris has a safety deposit box at the bank with $3 million she laundered for him. She asks Alex if he has the second key to Bob’s safety deposit box. Nope again! But, among the bundles of cash he’s hidden at Norma’s, Alex does have the key, and now knows what it’s for.

Julian finds Norman in the hospital entrance, challenging the security guard. He wants to go out front, but is only allowed in the courtyard. Julian tells Norman there’s something they can do, after hours.That night, Norman and Julian hangout in the hallway. Julian upsets an OCD patient to distract the staff so they can sneak out. Apparently, Julian isn’t new at this. He uses a screwdriver to open a small window. The two make it outside and run. Norman follows Julian down the road, where they try to flag down a ride. Each car that passes gets a barrage of swears from Julian. (Hey, way to get ‘em to stop, Julian!) A car finally stops. The boys climb into the car of an older gentleman, and they drive off into the night. They’re dropped off at a strip club, and Norman is instantly mesmerized by the strippers. Julian heads to the VIP lounge leaving Norman with a roll of bills. The stripper nearest Norman slides up to him, asking him if he’d like to go to the VIP lounge. Aww, geez! NO, Norman! She gets on his lap, and he starts having visions of Blair Watson. He asks her to move over so he can take the screwdriver from his pants pocket. (Is that a screwdriver in your pocket, or are you just glad to see me?) Norman morphs into Mother and scolds the girl for removing her clothes. There’s a kerfuffle down the hall, Julian has flipped out and the bouncers are kicking the crap out of him. Norman watches in horror. Dr. Edwards arrives at the strip club. Norman’s in an ambulance, disoriented and worried about Julian. Julian has been taken to the hospital with some broken ribs, but will be okay. Norman wants to know if there was anything else that happened, but Dr. Edwards says nothing else did. He does add that for the past four years, Julian has been escaping so someone will come looking for him because he needs to know someone cares.

Norman sits in the car with Dr. Edwards, staring out the window. He is so lost and scared and cries for Dr. Edwards to please, please help him. Again Freddie Highmore has me in tears! Now he’s a sad, lost child, truly scared about what’s been happening to him. He doesn’t even remember how he got to the strip club. Please take your meds, Norman!

Alex and Norma arrive home and can barely keep their hands off each other. Alex turns on the light. They freeze when they realize Norma’s house has been ransacked. Someone has tossed her house in search of something. Norma is scared, but Alex soothes her. He thinks it’s somehow related to Rebecca, and maybe his fault, too.

On this week’s Bates, Norma Louise and Alex jump the broom; Norman has a real problem with turkey pot pie;...