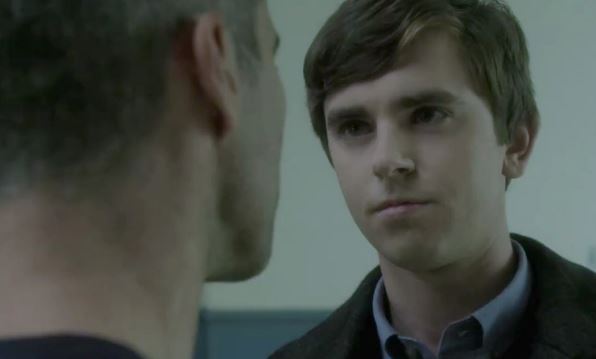 We return to White Pine Bay. It’s morning and Norman is awakened by the sound of music and the smells of breakfast. Juno hops into bed to greet Norman and they run down to the kitchen to find Norma smiling, surrounded by breakfast delicacies. Norman sits to eat and chat with his mother. The motel still needs tending, so Norman puts on his blazer and kisses his mother before heading out. As soon as the front door closes, Norma fades away, another painful reminder that she’s gone. The kitchen, in reality, is filthy with old plates, pots and pans and Norma’s apron.

Norman heads to town to look for some paint to spruce up the motel. Village Hardware is under new management, and Norman walks in to look around. The owner, Madeline Loomis (Isabelle McNally), a pretty blonde, looks a lot like Norma. I don’t feel confident that she will be in too many more episodes, but you never know. Norman chooses a few paint samples, and pulls out his wallet to pay. He opens it to find that it isn’t his wallet, it belongs to a man named Jim Blackwell. Norman mumbles his apologies and promises to come back when he has his wallet. Back at home, Norman asks Norma if she’s seen his wallet, she says she last saw it on his dresser. She suggests putting Blackwell’s wallet into the motel safe. Just in case someone comes looking for it – Ha! Norman decides to check his blackout log.

Dylan and Emma are thriving in Seattle, and now have a baby girl. When Norma died, Norman told Dylan that Mother wanted to cut all ties so they have had no contact. It’s Emma’s birthday, and there are lots of friends there to celebrate. The doorbell rings and Emma answers the door to find Caleb, looking more pitiful than ever. His face just makes me sad. He looks like he needs a hug. He says he followed Dylan and Emma on Facebook, saw the baby, and felt the need to reconnect with family. Caleb asks to hold baby Kate, and Emma gives a nod that it’s okay.

Alex is still in the federal penitentiary, working on his prison muscles, still angry as hell. His parole has just been denied, but he still wants Norman dead and jail won’t stop him. He repeatedly makes calls from the prison phone, but he gets no answer. What are you up to, Alex?

Back at the motel, Norman scans the registry book, searching for Jim Blackwell (John Hainsworth). He’s not registered. Norman looks through the wallet and finds a receipt. The date matches the date of one of his recent blackouts. Surprise, surprise.

He’s also received a bill for Luminol and is arguing the charge with the merchant on the phone. While Norman’s on the phone, a man enters, wishing to rent a room for a few hours. A smarmy Norman explains that the motel doesn’t operate that way, and makes the guy pay for an overnight stay. He registers as David Davidson (Austin Nichols). Norman gives him Room 1, right next to the office. He looks outside and sees the man helping a woman out of the car and into the room.  Norman hurries into the back room to the peephole he made under a painting on the wall. He watches the couple make love and decides it’s a good time for some pocket pool. The phone rings, and Norman buckles up with one hand and answers the phone with the other. It’s Norma on the phone asking him what he’s doing. Geez! Busted by his mother from beyond the grave!

Later, Norman heads up to the house for dinner. He asks Mother about a bill for Luminol. Norma knows nothing about it.  He says that he hates having blackouts, but dismisses Norma’s suggestion that he start taking his meds again. Norma notices the paint swatches, and is very curious about Madeline Loomis. Norman bristles at the interrogation, asking Norma what her problem is. Norma rants about the sacrifices she’s made just to keep Norman safe and happy.  Alive or not, Norma is angry. She reminds Norman of their “agreement”; she pretends to be dead so she can protect him. Oookay, so how ‘bout those meds? That night, a restless Norman gets out of bed without waking Norma. He sneaks out of the room and heads to the basement. He sits at the feet of the real Norma, resting his head on her lap. Poor dead Norma is wide-eyed and propped up in the macabre shrine that Norman created for her.

The next day, Norman finds the motel safe open, just as Madeline Loomis stops by with some paint samples. Norman has his wallet this time and pays Madeline before walking her to her car.  She invites him to a meeting in town for small business owners that evening. Norman sees Mother watching from a window in the house.

Dylan tells Emma that Caleb risked his life to get the money for her transplant. He doesn’t feel that he can turn him away. Emma speaks to Caleb privately later that evening. She is so very grateful to Caleb, but she has to protect her man. She tells Caleb to keep it moving. She fears Caleb’s presence will complicate Dylan’s relationship with his daughter. Sad Caleb agrees to go. Now Emma is the one looking out for Dylan. She is strong in so many ways now.

And none of them know about Norma.

Norman decides to attend the small-business meeting despite Mother’s objections. She doesn’t want him to use the car, but he decides to go anyway. Before he can back out of his parking space, Mother is behind the car. Boy, she’s quick for a dead woman!  She’s angry and drags Norman back to the house by his ear. She hustles him into the house and down into the basement to the freezer. She opens the freezer to show Norman why he needs her. Jim Blackwell is in there, wrapped in a shower curtain. Norman has flashes of Jim coming to the motel looking to hurt him, and Norma slashing at Jim, blood everywhere. They load Jim into the trunk of the car, and then into a rowboat. Once they’ve rowed out far enough, they lift the body, ready to throw it overboard. Jim’s cell phone begins to ring, and Norman decides to answer it. It’s a recording, asking Norman to accept a call from a federal correctional facility. Norman presses 1 to accept the call. He listens silently. It’s Alex, trying again to reach Jim. Unfortunately, Jim is indisposed. Well, now we know what Alex is up to.

Before the start of the 5th and final season of Bates Motel, let's review the fantastically dramatic Season 4 finale....