Fear The Walking Dead: “Blood in the Streets”/”Captive”

On Fear The Walking Dead, Alicia’s radio pal, Jack, boards the Abigail under false pretenses;  Strand becomes less of a mystery and Nick’s curiosity leads him ashore. Also, karma comes back around; blood is thicker than water and Chris is just clinging to his sanity. Find out more in our latest FTWD recap by Tracey M.  – David F. 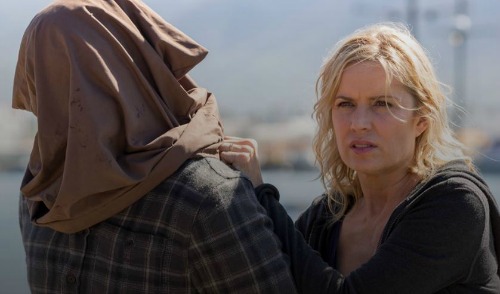 This week, the action starts in the ocean. Nick is swimming al fresco onto the shore towards a rudimentary tent-city, closed off by a steel wall. He has a waterproof bag tethered to his leg. There are dry clothes and directions. He and Strand have a secretive bond, planning quietly. He finds a tent and a walker. He harvests its blood, digging into its belly and covering himself with the putrid mess, and I’m gagging right along him. Once his blood-shield is on, he finds the piece of paper Strand gave him and surveys the area.

Strand is still a major sore spot between Maddie and Travis. Maddie wants Travis to trust Strand like Nick does. Chris and Ophelia stay up late imagining life in Mexico. They talk about how things used to be not that long ago. Old lives, old loves. Ophelia promises Chris there are girls out there somewhere. I think Chris needs to focus on his mental health for now. He’s a mess and is the first one alerted by screams of help from an approaching raft. A young man shouts for help, there’s a pregnant woman in distress. Strand is on the upper deck listening in. Alicia hears the commotion, and recognizes one of the voices, it’s her buddy Jack. Aww, shoot! Jack, along with Reed and his crew force their way onto the Abigail. Strand warned you,  Alicia, this one is on you.

Vida (Veronica Diaz-Carranza), the pregnant woman, knocks Maddie out, ties her hands and helps tie up the rest of the group. Alicia is forced to help, maybe leaving Daniel’s restraints a bit looser. The pirates search the yacht looking for Strand and Nick. Reed has Chris at gunpoint, demanding Strand’s whereabouts. He sure knows a lot about who’s on the boat, and is just too damned cocky to shut up. I want to hurt him. Real bad.

Jack looks overboard, and sees Strand’s raft leaving. Reed fires two shots and hits Strand and the raft. There’s no sign of Nick. While Strand lays cold and wounded, we finally get a glimpse into his past. He’s sitting at a bar in L.A. watching news about hurricane Katrina. Victor Strand tells the man next to him that his investment is now submerged. He introduces himself as Thomas Abigail (Dougray Scott) and the two talk about their investments while tying one on. Later, Victor helps Thomas back to his hotel room and puts him to bed. Victor, always the opportunist, helps himself to a few of Abigail’s credit cards. Thomas sees him with one eye and smiles, “Now you’re obligated.” The next morning, Thomas Abigail and Luis Flores (Arturo del Puerto) bang on Strand’s door. Abigail likes what Strand’s done with $36k lifted from his accounts and isn’t angry.  He likes Victor and his way of thinking. Victor says he’ll pay Thomas back with interest. Abigail asks Strand to meet him at the bar. Eventually, Thomas asks that Victor stay with him on his private island and not want for anything. Who would think that a con man and his con could fall in love?

Back on the boat, Travis is having trouble starting the yacht. Reed takes him to the engine room at gunpoint, but not before Travis can slip a crowbar to Daniel, who devises a fight plan with Maddie. Alicia and Jack are in her room, away from Reed and Vida. Jack asks Alicia to go with him, once his brother, Connor arrives. Jack says his brother always listens to him. Jack has to promise to keep her family safe before she’ll agree. He cuts her restraints so she can hug him. Work that body, Alicia!

Maddie and Ophelia get into Vida’s head, scaring her. What if her baby is dead, won’t he turn? He’ll be hungry. Eww. Soon, Connor (Mark Kelly) arrives by boat with more goons. They barge aboard the yacht. Daniel is working his restraints ceaselessly while Reed continues to taunt and brag. Meanwhile, Luis and Nick are on a raft rushing to the Abigail. Luis fires some great sniper shots, taking out a few goons. Now free, Daniel impales Reed with the crowbar, and frees the others. Maddie heads out on the raft to rescue Strand, who is barely floating, trying to stay alive. Maddie extends both hands to pull him aboard. Strand is truly grateful, and that is something you can take to the bank.

Connor and his goons cover Travis and Alicia’s heads with pillowcases and retreat with Travis and Alicia to their docked ship, leaving Reed behind. Alicia and Travis are separated on Connor’s huge, docked ship. Connor is upstairs cooking steak for  Alicia while an unconscious Travis is in a locked cage below. Travis wakes, rattling the cage, yelling for help. And guess who comes around the corner to gloat, our flight attendant, Alex. Whoops!  She refuses to help Travis, but makes sure he knows how it was for her, stranded at sea. And how much she told Connor about the passengers aboard The Abigail. A badly wounded Reed is attended to by Daniel, and I know he made cleaning the wound hurt more than he had to. There’s still so much I want to know about Daniel’s past. He’s an under-the-radar badass. Reed warns that Connor will come back for him and make them pay. He’s waxy-pale and sweating, in no position to threaten. Daniel asks Chris to stand guard over Reed. Chris is unstable now though and needs to be the one being watched. Connor has made contact and wants his brother back. Maddie agrees to a trade for Alicia and Travis. Reed continues trash-talking Chris, so it’s no surprise that Chris shoots Reed in the face, swearing he was about to turn. Great, there goes the bargaining chip. Apparently, Chris didn’t hit the brain, because Reed has turned, and thrashes around in his seat.

Connor agrees to the exchange; Maddie and Daniel cover Reed’s head with a pillowcase, and march him out to the raft. The pillowcase prevents him from biting, but Maddie is nervous about thrashing zombie-Reed.  As she pulls up to the dock, Travis, head covered, is marched toward her. She manages to get Reed onto the dock, close to his brother and frees his hands just in time for Travis to head butt a goon, kick some ass and get away. Connor removes the pillowcase from Reed, and screams as Reed munches on him and his henchmen. Alicia has gotten free and is high on the deck of the ship. She sees the raft, and decides Jack isn’t worth jack. Heartbreaker or tease, Alicia? She slides down the slope of the bow, and jumps in the ocean. The raft heads toward her, and she climbs aboard. She and Jack stare at each other as the raft pulls away. Poor, sad Jack. Connor and crew are left wrestling with a very hungry, bitey Reed, and soon they’re far behind the Clark/Manawa family as they return to the Abigail. Now to find out why Luis Flores was so surprised that so many were coming to Baja. Let’s hope Strand’s plan will work out for all of them. I have a feeling that nobody rides for free.

Fear The Walking Dead airs on AMC Sundays at 9/8c.

On Fear the Walking Dead, Madison’s loyalty gets questioned; Strand’s plan is revealed, and the wreckage of a downed flight...