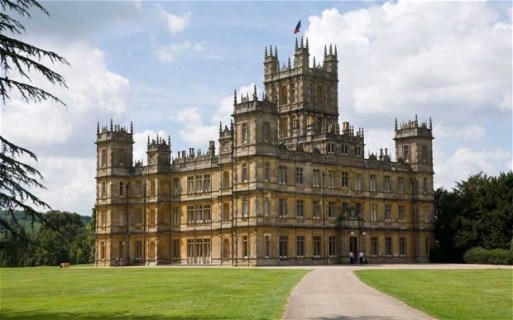 As always the infamous Crawley family is rife with scandal and intrigue, but now it turns out that the manor house itself is in the midst of a crisis. In a bombshell interview, Downton Abbey speaks out about its fears for the future.

Amidst rumors that the great house might be obsolete, Downton reflects on its legendary history. “You should have seen me in 1912. There were so many servants bustling about that you didn’t even know all their names. Housemaids, footmen, a full kitchen staff. Oh, those were the days. Now, you could practically count the staff on one hand and who knows what most of them do all day. Take that Mr. Bates, when he’s not behind bars, he spends an awful lot of time sitting on his bum in the servants’ hall. Does he even come above-stairs anymore?”

The legendary home was once the center of social activity. “Oh, we had the grandest house parties. Our garden parties, benefit concerts and cricket matches were the dog’s bollocks. Did you know that when we went to war, the locals heard the news right here at a garden party? And I even opened my doors as a convalescent home for soldiers. You wouldn’t believe the things I’ve seen. Not to tell tales out of school, but this sexy Turk, Mr. Pamuk, visited for a hunt one time and he was keen on Lady Mary, of course. Nearly every man who sees her is keen on Lady Mary. Poor Edith. Let’s just say there was a bit of how’s your father? She killed him with her poisonous vagina but there was a coverup.”

Downtown Abbey places the blame for the current precarious state of affairs squarely on the shoulders of the Earl of Grantham. “You know Lord Grantham only married Lady Cora so he could hold on to me, right? It’s true, it was a financial arrangement. Why else do you think he would wed that somnambulant American, who just drifts about the place in some sort of haze. She must be on horse tranquilizers or something. You know how these nouveau riche American women are. Their money can’t buy them into high society at home so they come over here and get married to some guy with a title trying to hold on to his estate. Lady Cora bet on the wrong Brit, though. You can always count on the earl to cock up financial matters. In 1920, we found out that he’d poured a lot of money into the Grand Trunk Railway and we were nearly bankrupt. He did mention investing with some Italian chap, I think his name was Charles Ponzi, but I don’t know what came of that. Matthew told Lord Grantham that he needed to handle things differently but then Matthew just abruptly left. They say Matthew faked his death and went to Hollywood, but who knows? Nobody ever heard from him again, so he probably should have stuck around.”

Downton Abbey is concerned about what’s happening with area estates. “The family’s friends are selling off their homes and auctioning their belongings. I overheard Lord Grantham talking to the Dowager Countess and he made some crack like, ‘Who lives as we used to now?’ At the risk of being paranoid, I’m really starting to wonder about that fire in Lady Edith’s bedroom last year. They called it an accident, but I don’t know.”

The home hopes that things aren’t as dire as they appear. “Despite what they’re saying, the Crawleys tend to move on and forget about things. One minute everyone is concerned about something and then it’s never brought up again. Except for that whole Mr. Green thing with Anna and Bates back in 1922. We had to hear about that for three years, but thank God they wrapped that up recently. I hope we don’t have to wait that long to find out about my fate.”

We love hearing from Downton Abbey fans. Comments don’t appear right away, but we’ll get to them as soon as we can find a servant.

Downton Abbey's madcap Lady Rose is no longer a thorn in the side.