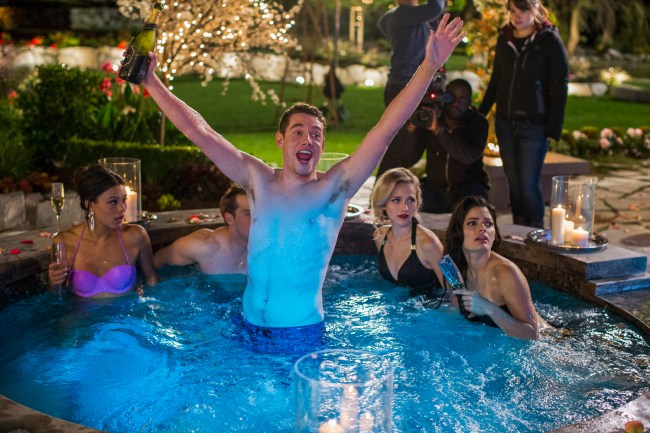 For this week’s episode of , Everlasting, we pass judgment on the contestants and evil geniuses with a very special rose ceremony.

In an effort to “win” Adam, Grace got down and dirty. She found a utility closet or some location which should be beneath any woman not having sex with Pornstache Mendez at Litchfield prison and used the old down-on-knees approach.

Verdict: The performance was uncreative, it’s no way to go on an “Amazing Journey.” Zero roses.

When she was reprimanded by producer Rachel, Grace brought up Rachel’s well-circulated raunchy missive to Jeremy and suggested that Rachel makes googly eyes at Adam.

New Verdict: The people in glass houses defense is always a winner and Grace boldly used it against a producer with the power to give her a bad edit. She also made a keen observation about Rachel’s interaction with The Suitor. Three roses.

Evil Queen Quinn is aware of Anna’s eating disorder and nearly clapped her hands with glee at the thought of a contestant sprawled on the bathroom floor, surrounded by her “concerned” rivals. I could be wrong about this, but I think the germy bathroom floor technique is relatively new. Damn my inability to retain memories of former The Bachelor contestants. I do recall den mother Renee Oteri crawling under a bathroom stall to help one of her Juan Pablo sister wives who was having a freakout. All that bacteria to console some random drama queen.

New Verdict: In terms of evil, it gets one dozen roses.

Quinn had to escort her married lover, Chet, to the ER. It turns out their affair isn’t so secret. Chet’s wife knew all about it and mercilessly took down Quinn. Chet’s wife boasted that she’ll get millions, the real estate, everything that rich ladies get, while Quinn gets nothing. To turn the knife, she added that she’s glad that Quinn has sex with icky Chet, so she won’t have to do it.

Verdict: So the Evil Queen has been outmaneuvered. Quinn loses 24 roses, which puts her at a  -12. The Wife played this brilliantly and earns 36 roses.

The Suitor’s friend showed up to “help.” Usually, I find this one of the tiresome Bachelor conventions and use the time to fill my goblet with more wine and look for cookies. I did enjoy it when the family of farmer Chris Soules picked Jade for the Disney Princess date and she got to whirl around in a Cinderella gown. Jade’s known for her cooch shots, it was delightful that the down-home family saw her fairy-tale potential. It just dawned on me that glass slippers look a lot like stripper shoes. No judgment, just a mere observation. In any case, Adam’s friend Roger encouraged a raucous Bachelor-style pool party, which nicely lowered everyone’s dignity level.

Verdict: It was an undeniable but lesser-known, Bachelor parallel and deserves six roses.

Sullen Biterella Shia almost got to shine as an evil genius. It was an admirably Machiavellian move to convince respectable Maya, the sommelier, that in order to impress Roger — and increase her chances with The Suitor — she needed to act like a party girl. Maya took the bait, she boasted about being a “hedonist” and started getting a little handsy with Roger in front of Adam. That’s not Everlasting wifey material. Despite that, — or probably because of it — Roger selected Maya, along with Grace (of course) and Anna for a three-way. By that I mean three ladies were selected for an intimate dinner with Roger and Adam.

Maya, you should know better.

Verdict: I don’t approve, but it got Maya what she wanted. She gets one rose and some severe side-eye. Kaitlyn and Britt had better ways of getting attention, Britt just prettied all over the place and Kaitlyn cracked jokes.

After the women on the special date performed the requisite talk of their dreams for a family, Maya stripped down for champagne-fueled water sports. This was simply embarrassing.  After the other attention whores rushed from the mansion to crash the date, they egged on Maya with a lot of “woohoo!” and chants of “Maya! Maya! Maya!” she ended up in some sort of sordid off-camera tryst with Roger and emerged with running mascara and a pathetic walk of shame.

Verdict: Zero roses, and I’m being kind by not putting her in the deficit column like Quinn.

Adam felt bad for Maya and she got to go on a solo date with him.

Verdict: Adam gets a rose for showing foolish Maya pity.

Shia completely fucked up; her pool party coup backfired. The loud music and chaos made the spectacle unsuitable for editing.

Verdict: Shia gets all of her roses taken away. That’s a big zero, Shia.

Rachel was in trouble with Quinn for not being on top of things. She rectified the matter by telling Anna that Grace is blabbing about her eating disorder and a poolside catfight ensues.

Verdict: Rachel, who was having a shitty day, rallied and was appropriately evil. She gets six roses and bonus roses for scoring a poolside catfight, which will be great for ratings. That’s a total of 18 roses.

The winner: Chet’s wife. Humiliating an evil queen in grand style is the ultimate chess move.