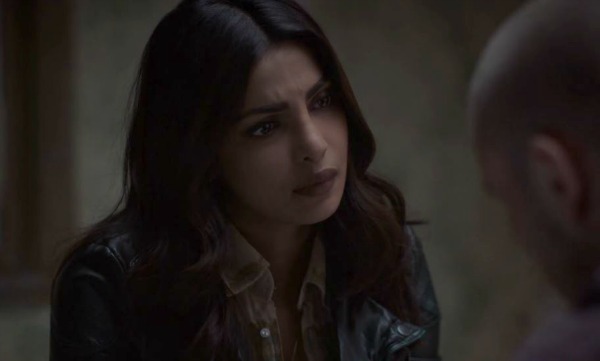 The Farm recruits break out of the torture chamber armed and ready to finally take down the terrorists. Ryan is still missing  and Shelby is no closer to finding a way to save the hostages. Buckle up!

This Week’s Flashback: Alex and Ryan are trying to have some alone time when Nimah ruins things– again. Ryan still doesn’t know any more about his AIC recruitment but has suspicions that Dayana and Sebastian are tapped too.

My favorite couple is still together, however their relationship is more about Shelby figuring out Leon’s end game. She tries to bait him, but it takes a while to go through. I’ll get to that in a second.

In the spirit of the holidays, this week’s lesson is about relationships, oh, and keeping lies from your loved ones. Alex wants to spend the long weekend with Ryan since they don’t really have families;  he quickly tells her to contact Miranda and then bolts. Ouch.

Tired of  the runaround, Alex follows Nimah straight to Shelby’s door. Alex learns she no longer has a handler and apparently the New York office wants her back. She must leave the Farm. To paint the picture for Alex, who is having a head time grasping the situation, Shelby tells her point blank she failed. Dagger to the heart.

Ryan finally got a message from AIC which leads him back to the woods. With a stun gun in hand, he is set to take down a random man and drag him to a barn. Ryan succeeds and leaves the man behind. Five seconds later, Leon shows up with a message that says ‘grab the gun.’ Clearly he’s an AIC recruit, too.

We know Leon follows orders because he shows up at Shelby’s door with  blood on his hands and confesses to murder. What a nice relationship they have. But the real MVP relationship belongs to Ryan and Alex. After all the AIC fun, Ryan finally proposes to Alex at the safe house, and she obviously says “yes.”

While Leon and Ryan might have had a tough time, both AIC men ended the day on high notes. That is, until they return to the woods, for the third time. Dayana shows up too. Let the AIC party begin!

Miranda shows up later to ruin Alex’s bliss and apologizes for cutting her off. She says Alex will return to New York in five months. Alex tells her no and says she’s staying at the Farm to take AIC down herself. Alex does love having the last word.

This Week’s Present: Sebastian, Harry, Leon, Alex, and Dayana are in the bunker where Leon is dressing Dayana’s wounds. Alex calls Shelby for intel where Shelby tells Alex she has to disable a biological weapon inside the building. On Shelby’s end, she’s dealing with Miranda who is not happy about the U.S. Northern Command taking the reins of the crisis.

In another location, Nimah reveals herself to Raina dressed in the terrorist garb. Nimah says she believes in what the terrorists believe which is apparently that freedom is a lie and doesn’t exist. Raina isn’t buying any of this and shuts Nimah down every chance she gets. Raina tells her she’d rather die than join her. You go Raina!

At FBI Headquarters, Shelby and Miranda learn that General Richards is planning a drone strike that would kill everyone in the building. Miranda appears genuinely worried about this plan. Shelby on the other hand, believes in Alex and the General gives her 48 minutes to stop the bomb or they’ll strike with the drone.

In the bunker, Alex gets the necklaces off the recruits and they create a homemade blow torch that will apparently stop the weapon. The group leaves and moves closer to the roof where they believe the weapon is. Dayana can’t travel far because of her injuries so she stays behind and Leon stays with her. This leaves Sebastian, Alex, and Harry going up through the air duct.

As they move through the vent there’s a dip. Sebastian almost falls many floors down, but Harry catches him. The downside they lose the blow torch leading Alex to send Harry back for another one because she doesn’t trust Sebastian and Harry alone together.

Sebastian and Alex find the weapon on the roof and realize it’s designed to kill everyone inside the building, not out. Alex tells Sebastian they have to warn the FBI. As they’re running down an alley, which puts them in plain sight, they run into Harry, Dayana, Leon -and conveniently- a group of terrorists.

Alex is taken away from the others by one terrorist. As she fights him she knocks off his mask to reveal Ryan. GASP! He then throws Alex into an electric perimeter and says if she crosses it the weapon goes off. She tries to plead with Ryan, but all he does is walk away putting his mask back on.

“If we don’t spy on our spies we know nothing at all.” – Harry’s Handler

“I’ll never let anything come between us” – Ryan

“There’s a terrorist convention right around that corner” – Harry

“You’re not my other half. You’re my shadow. You’re the darkness I leave behind me” – Raina

Quantico returns on Monday, January 23 at 10|9c on ABC

Ryan is M.I.A., Alex was left to die and the other CIA recruits are being held hostage. That means the...