With three episodes left we finally have two Liars engaged! However, we are still no closer to figuring out who A.D. is. On the positive side, Aria was rewarded with the police report she never filed, Spencer got some closure with Mary Drake and Mona, and, well Mona is creating her own A.D. dungeon. 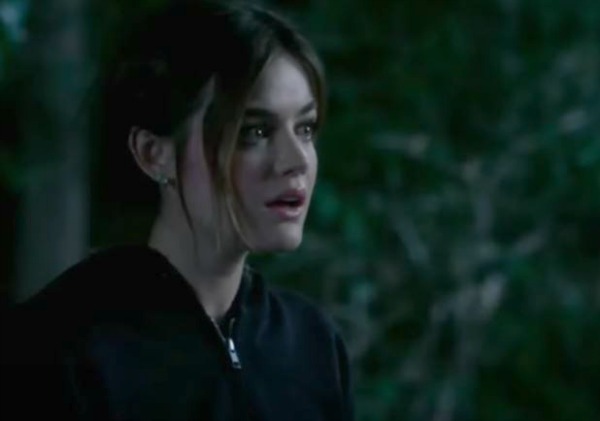 It’s a nice start to the morning for Emily and Alison until they find the board game sitting on their bed with Aria’s new pieces attached. They start wondering if A.D. is in the house when the police  bang at their doors with search warrants. It was a quick scare for them when they thought the police would find the game, but lucky for them, A.D. was able to make it vanish as quickly as it appeared. The police hit every Lairs’ home and took their phones in the process.

Spencer storms into the station to give Marco a piece of her mind but instead, finds Detective Tanner in his place. She tells Spencer that Marco filled her in on everything, and she means EVERYTHING, and is now lead detective. Goodie. She gives Spencer a chance to come clean but, of course, Spencer doesn’t bite.

While everyone is congregating at The Radley, Aria is at the Brew where she gets a phone call. Since the cops have her phone, A.D. stashed a burner in the vent. At her wits end, Aria demands a meeting face-to-face. A.D. agrees, as long as Aria wears the hoodie. After Aria hangs up we see Mona taking off a headpiece back in her lair.

It makes it seem as though Mona made the phone call, but is that the whole story?

As Spencer hands out burner phones to everyone (expect Aria since she’s M.I.A.), Hanna discovers the phone from Liar’s’ Lament sitting on a platter. It flashes, “CHOOSE OR LOSE. Just one plea, the rest go free. If no one steps up, you all go down.” Then a countdown of 36 hours starts. Immediately after, Mona bursts through the doors and tells them if they want answers, they need to ask Aria. “I think she’s on the A.D. team,” she says.

Mona goes through the details on how Aria keeps being absent when major A.D. drama goes down. She even told them about Aria receiving the new puzzle pieces at The Brew but Spencer wants “concrete proof” and Mona warns, “just remember, you asked for it.”

Their concrete proof comes quick as the girls come face-to-face with Aria donning the black hoodie as she’s waiting to meet A.D. Aria immediately confesses (I mean the girl was caught in the hoodie). She tells them about the police report and how she was trying to meet A.D. No one, especially, Spencer is up for her excuses.

On cue, Tanner calls them to the station and Spencer makes Aria find her own ride there. LOL. At Rosewood P.D., Tanner shows the girls evidence against them including pieces of glass from Lucas’ windshield found in Spencer’s shower drain. Since she can’t arrest them that moment, she lets them leave.

In the car, Aria calls and unleashes her anger on A.D. While she screams about A.D. turning her against everyone she loves, A.D. says that their relationship isn’t over just yet. While Aria is about to throw the phone out the window, A.D. creepily says, “Don’t, tomorrow’s another day.”

At The Brew, Spencer, Hanna, Emily and Ali sit around trying to figure out their situation as the “Choose or Lose” clock dings 24 hours left. They start blaming themselves with Hanna saying it was because she was driving the car, Spencer because she used Archer’s card, and Ali because she married the guy. Emily also reminds Spencer that she should be easier on Aria since, “A.D. convinced you to play the game first.”

Spencer takes that to heart and goes to make amends with Aria, sort of. Spencer starts off by saying she she wishes she could forgive Aria and that none of them are blameless. Before she can continue though, the police interrupt as they return Aria’s files. Tanner arrives and says they found proof that Aria was in New Hampshire when Archer was murdered. Basically A.D. came through for Aria and fabricated an alibi.

While all this mess is happening, Caleb and Hanna are taking their relationship to the next level. Even though they just got engaged, Caleb surprises Hanna by taking her to a justice of the peace. Hanna’s mom is there as the witness to see the best PLL couple finally tie the knot. On the plus side, if they do go to jail at least they can’t testify against each other. Yay marriage!

The next day everyone, minus Aria, is together as the clock winds down. They promise no matter what happens, everyone has to understand their choices. As the timer hits zero and asks “WHAT’S YOUR CHOICE?” Spencer smashes the phone with a rock making all of us wonder why they didn’t do that from the start.

Alone, Aria calls A.D. and tells them she’s turning herself in. However, A.D. informs her that won’t work. “Time ran out. The game is over. And guess what? You won. The prize chosen especially for you is an unlimited supply of freedom.”

On cue the phone explodes in her hand and sizzles to a crisp on the ground. Aria finds her original phone in the police boxes and calls Spencer. She leaves a voicemail saying she’s found a way to make things right. As she says that her car starts stalling. She pulls over and checks her trunk to find a dead body stuffed in it. If her situation couldn’t get worse, a cop pulls up right as she slams the trunk shut.

Rounding out the night’s adventures, Caleb has been searching to the board game and gets a hit on a cell tower that connects to it. He grabs Ezra and the signal leads them to Mona’s apartment. Through a thermal camera, they can see Mona’s silhouette by the board game. Inside her room, Mona lovingly looks at the game as a mini jail cell pops up out of the grass.

Could she really be A.D. or did she steal the game to save the Liars?

Who is A.D.? Part of me thinks Charlotte isn’t even dead at this point and she’s come back to finish them off.

Best Line: “This time around is kind of special…we did kill a guy.” – Emily

Even though all signs pointed to him, we learned that Lucas is sadly not A.D. Well, he still could be,...