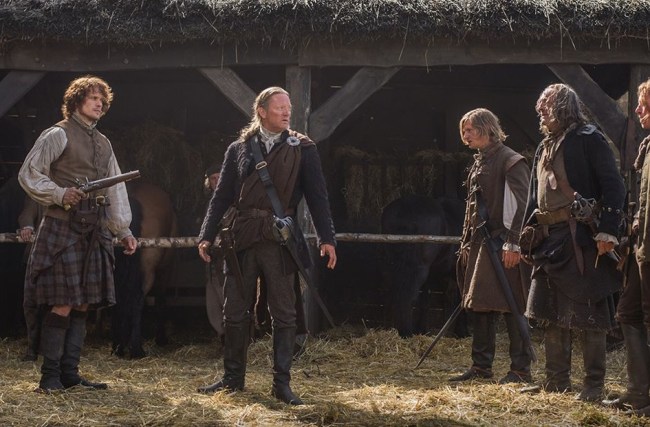 Jamie Fraser is nearly perfect. When his new wife Claire mentioned that unexpected time travel transported her from 1945 to 1743 and that she had left behind her 20th-century husband, Frank Randall, Jamie took the news quite well and even gave her a chance to return to 1945, a less violent and dangerous era which would fulfill the nurse’s yearning for disinfectant and other medical advancements. Have you seen Jamie? Claire declined a ride on the mystical portal and accompanied Jamie to his home Lallybroch, where he presides as laird. Jamie, who was wrongfully charged with murder, has been hiding out from the redcoats. Going back to his home seems like a risky strategy, but it does keep Claire safer than she’s been anywhere else and Jamie will do anything to keep his bride safe. Jamie’s sister Jenny Murray, takes a dim view of her in-law; being British in 18th-century Scotland is sometimes frowned upon.

Jamie and Claire have just experienced a peaceful moment, so Outlander reminds us not to get too comfy. A band of unexpected visitors have shown up at Lallybroch. While a thoughtful drop-in guest might bring some Danish or a bottle of merlot, these guys go the unexpected route and hold a gun to Jamie’s head.

How on Earth does Jamie manage to be so dreamy when someone is aiming a gun at his head? How is that even possible? As it turns out, Jamie, Claire, and Jenny are all excellent at giving each other significant looks so it’s apparent that everyone needs to use their ESP skills. It turns out that Jenny’s skill set involves more than giving her sister-in-law severe side-eye and humiliating sadistic would-be rapists, she really knows how to defuse a situation. She acts all cool and casual when she introduces Taran MacQuarrie to her “cousin” Jamie MacTavish. In addition to being dreamy, Jamie has some crazy long name, so it’s easy to come up with aliases and MacTavish is the one he’s been using lately.

Since everyone’s facial expression conveys subtext, MacQuarrie joins in the fun and facially subtexts, too. His facial expression calls shenanigans on this “cousin” business, but he goes along with it. MacQuarrie and his cohorts are the worst uninvited guests in the world. Showing up without notice is bad enough, but they are all bossy and entitled. It goes like this:

Rude Guests: Hey, Jenny just run along and make some rabbit stew. Oh, good here’s your husband Ian, who has just had our sword polished or something involving weapon maintenance.

Jamie’s Face: I am shooting death glares at you, but I’m also being extremely handsome.

Jenny’s Baby: Uh, not to be pushy, but her water is about to break, so let’s ease up on the unreasonable demands, Rude Guests.

It turns out that the visitors are part of “The Watch,” essentially they are in the redcoats’ collective pocket, which means they are not #TeamJamie. Not being on #TeamJamie is immediate grounds for dismissal in my book. (The book I regret not reading before the series began.)

Dinner is tense and involves a lot of subtext, it goes like this:

Jamie: At least my facial subtext is extremely handsome.

MacQuarrie: You have an interesting accent, Jamie.

Claire: Oh, he probably picked that up when he spent years in France hiding from trumped-up charges made by sadistic Captain Frank Randall, who is rape enthusiast obsessed with hurting Jamie. Hmm, maybe I just gave away something. I forgot that every time I make a reference to France it leads to trouble. Sacre bleu.

These rude guests manage to find new ways to be awful, Jenny goes to the trouble of making sure they have extra blankets and fresh hay to sleep on with chocolate mints on their pillows and they still spit and refuse to use coasters. The visitors also think it’s amusing to set the hay on fire and watch Jamie extinguish the blaze. They are less amused when he lunges at them and shares his feelings about The Watch. Jamie shares his feelings with his fists. Hey, look who’s here to inflame the situation? It’s Horrocks, some shady Irish guy from Jamie’s past. He also uses facial subtext to let us know that he is aware of the price on Jamie’s head. He makes a lot of insinuating comments about the desirability of Jenny and Claire and demands money to keep quiet.

Ian suggests that they use some secret funds to pay off the blackmailer, but Jamie is not hearing of it, that money is for Jenny, Claire and the future children he and Claire will have one day. Speaking of children, Jenny has been talking a lot about pregnancy with Claire, who looks a little down. The Foreshadowing Fairy flutters about making significant facial expressions. You know where this is leading. Jamie tells Claire that there are lots of funds for her and their future children and poor Claire sobs that she can’t give Jamie children. We’re not used to a sobbing Claire, but we are used to Jamie being nearly perfect. It goes like this:

Claire: I would have told you sooner, but I didn’t expect to fall in love with you after our hastily arranged marriage.

Audience: That’s funny, we all fell in love with Jamie in the first episode. What took you so long? Well, welcome to the fandom.

Jamie: Remember how I was completely cool with you being a married time traveler from 1945? Now I am going to be even more swoon-worthy. Despite the fact that I was looking forward to a family with you, I’ve decided that a life without kids is for the best. Women are always dying in childbirth and I could not stand it if anything happened to you. I would do anything to protect you from pain. Anything. I would rather be in pain than for you to be in pain. Now come here while I handsome all over you.

Audience: Give us a minute to swoon so hard that we pass out.

Foreshadowing Fairy: Just remember what he said about complicated childbirth and how he’d do anything for Claire.

Audience: Don’t even think of hurting Jamie again, Outlander. We mean it.

The rest of the episode is filled with wall-to-wall drama.

It turns out that MacQuarrie never liked the Irish blackmailer anyway and is totally cool with dreamy rebel fugitives, he wants Jamie to take part in some The Watch activities. Jamie and Ian join the men with the intention of making this a short-term gig, but MacQuarrie wants Jamie to think of this as a permanent assignment — or else.

Three days later Claire and Jenny are waiting for their husbands to return. The fact that Jenny is on her feet after three days is astonishing. I guess the year 1743 is not into maternity leave. It is into stressing out the audience, however.

Ian returns to Lallybroch with a bloody MacQuarrie. The rest of the team has been wiped out and the redcoats have Jamie, this will place him in the clutches of Black Jack Randall, Outlander insists on messing with the audience’s emotions.

Please leave a flattering comment, they don’t appear immediately, but we’ll get to them. If you are an Outlander pro, please don’t give away spoilers for those who have made the poor life choice of not reading the book first.

Ever since becoming trapped in 18th-century Scotland, Claire has been trying to reach Cragh na Dun, the ancient stones, which...