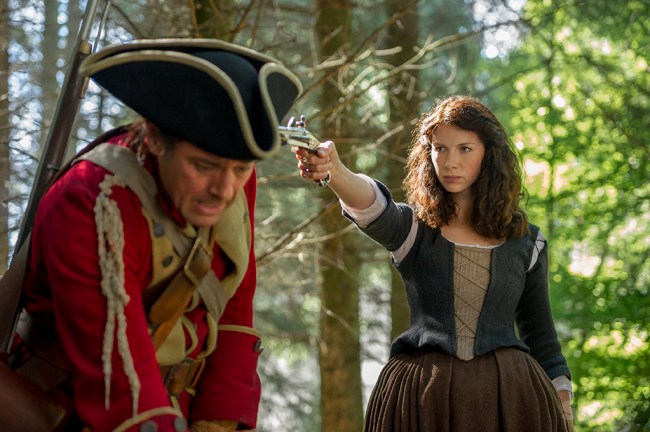 Claire took a wrong turn in 1945 and wound up in 1743 — we’ve all been there, right? Fun fact: 18th-century Scotland gives severe side-eye to an English outsider or “Sassenach.” It’s also an era where weapons training is a necessity for women. On the other hand, there’s Claire’s new husband Jamie Fraser who is made of dreamy. He is also a fugitive from the redcoats due to some trumped-up charges and has been recaptured. You know who doesn’t sit around like a damsel-in-distress? Claire Beauchamp Randall Fraser, that’s who! The sassy Sassenach sets out on a dangerous quest to rescue her man. She has allies. Jamie’s got a no-nonsense sister, Jenny Murray and a badass godfather, Murtagh Fraser. He also has Uncle Dougal MacKenzie, kind of; Dougal’s a solid warrior, but he can be shifty.

Let’s go! The primary concern is to save Jamie from Black Jack Randall, the sadistic captain has a disturbing fixation on Jamie and his family. Claire thinks she can get help from

The primary concern is to save Jamie from Black Jack Randall, the sadistic captain has a disturbing fixation on Jamie and his family. Claire thinks she can get help from Lord Thomas, Randall’s superior because he’s cordial to Claire and take a dim view of Black Jack; sounds like a long-shot. During their reconnaissance mission, the ladies spot some of the redcoats, but Jamie’s not with them. It goes like this:

Redcoat: I’m going to conveniently stray from the other redcoats.

Jenny and Claire: Two guns, one redcoat Stay still while we tie you up.

Redcoat: I have a bright idea, I’m calling you harlots and sluts now.

Jenny: While Claire politely asks you about Jamie, I’m just gonna get this hot poker ready. I’ve got a baby to nurse, let’s wrap it up.

Redcoat: Fun fact: That hot poker you’re holding to my foot makes me whimper and cry.

Claire: Wait, let’s resolve this with “I” statements. Can we use that poker as a talking stick? I still don’t understand how 1743 works.

Jenny: I see I have to hold this poker to your bollocks now.

Redcoat: I’m fond of my man parts, let’s talk first. Oh, by the way, when I get free, I’ll tell everyone about this and you’ll hang.

It turns out that Jamie escaped the redcoats. He certainly can’t return to his home, Lallybroch. Despite the fact that the redcoat said the ladies will hang, Claire wants to tend to his wounds and release him back into the wild or something. After all, she’s a nurse. Oh, Claire. Hey look who’s here, it’s Murtagh, Ian sent him a text! Murtagh has knife skills. Buh-bye Redcoat. 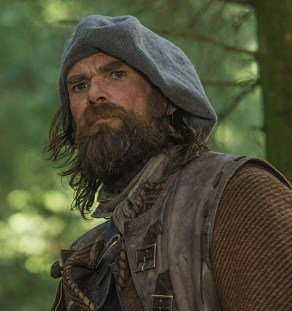 Murtagh has strategic skills, they travel to villages with Claire as a roaming nurse. It’s important for them to get attention on these stops, Jamie will likely catch wind of it. During evening festivities, Claire conducts palm readings. It goes like this:

Claire: I see a strapping redhead who makes ladies swoon. Sound like anyone you know?

Murtagh gets attention with dance performances. Murtagh has so many skills, dancing is not one of them, but he sure is enthusiastic. The audiences are enthusiastic about showing off their pitching skills as they lob tomatoes at him. Claire suggests they do something jazzy and serves up some Andrews Sisters realness. Murtagh hones the act: Claire keeps the beat, but changes it to a bawdy Scottish song and cross-dress. Nobody will forget a saucy song from a cross-dressing Sassenach. Murtagh is before his time.

The son-and-dance act is such a hit that Mr. Ward, a shady Gypsy, steals it for his own cross-dressing Sassenach songstress — he employs a better dancer, though. That’s copyright infringement, my friend. Oh, wait that doesn’t exist in 1743. Oh, 1743. Claire explains that she is the only one who can sing the song because it’s a secret message for her husband and pays off he Gypsy. Murtagh does not trust the word of Gypsies, thinks the song-and-dance routine is over and tells Claire to go home. Oh, Murtagh. Nobody tells Claire what to do.

Claire uses the old “You’ve never lost anyone you’ve loved routine. That’s ridiculous, we haven’t seen Jamie this episode, which means we’ve all lost someone we love, Claire. Just have a seat, Miss Lady. Murtagh shuts Claire down with a story about his lost love, Jamie’s mother, Ellen. Claire cries, we all cry. We love Jamie. We love Murtagh, too and I regret ignoring him all season. The duo continues performing.

Mr. Ward turns up, he’s still using her song, but he got a message, which, he knows was meant for Claire. The message directs Claire and Murtagh to a meeting spot, but Dougal is the one waiting for them. Good news: Jamie is alive! He heard about the song and went looking for Claire. Bad news: The redcoats were waiting and now he’s at Wentworth Prison. This is bad, this is really, really bad.

Dougal reports that Jamie has been sentenced to death and has a private chat with Claire. It goes like this:

Dougal: Jamie’s as good as dead. Let’s get married. I can keep you safe and get my greedy hands on Lallybroch.

Claire: You’re kind of a douche.

Dougal: Yep, but Jamie would want us to marry so I can save you from Black Jack.

Claire: Let’s go save Jamie, if that doesn’t work, I we’ll get married.

Murtagh and everyone else in the scene: We’ll all fight to rescue Jamie and we’re not shifty like Dougal, so you don’t have to marry us.

Me: I haven’t finished the book yet and have avoided spoilers. My Twitter timeline keeps freaking me out with ominous #WentworthIsComing Tweets. Damn it Show, I need sedatives.

We love comments. They don’t appear right away, but we’ll get to them. Please don’t give away any spoilers for those who haven’t read the book. Thanks!

Jamie Fraser is nearly perfect. When his new wife Claire mentioned that unexpected time travel transported her from 1945 to...