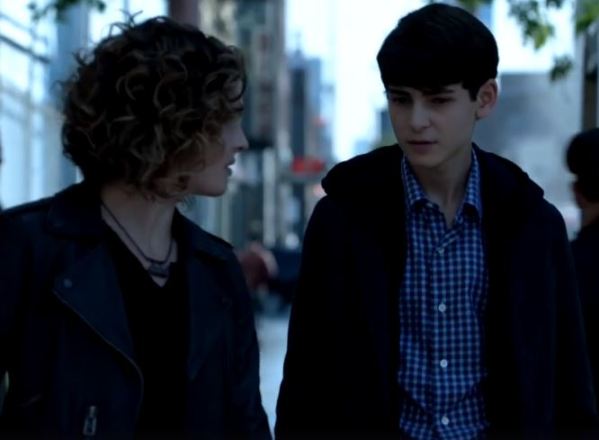 The madness in Gotham continues to propagate. Jim Gordon is still feeling the after-effects of his encounter with Jervis Tetch. Tetch, meanwhile, increases his efforts to get his sister Alice back. Young Bruce Wayne and Alfred go on the hunt for Bruce’s clone Five, who has developed a crush on Selina Kyle. And in a plot line ripped right outta today’s headlines, Oswald Cobblepot, aka Penguin, tries to cement his hold on political power. Will the madness trump all else in Gotham? Let’s find out, shall we.

As things begin this week we find Alice in the custody of the GCPD. Bullock has her in the box for questioning while Gordon observes from behind the one-way mirror. Alice explains about her blood and begins to try to convince Bullock that she’s not a monster, rather her brother is. While she’s not too forthcoming, Alice seems to genuinely warm to Lee Thompkins. When Lee gives her a quick medical exam Alice tells the good doctor her life story. Alice explains that the toxin in her blood affects each person who comes in contact with it differently. She also says that her brother likes to prey on people’s fears and can use this a way to control them through his hypnosis. As if to prove this point we next see Jimbo at an intersection. The clicking of the automated crossing guard sets off the hypnotic effect that Tetch implanted in his mind and Jimbo almost get’s himself perished by trying to walk in front of an on-coming truck. Gordon realizes what just happened was an effect of Tetch’s hypnosis and knows that he must find Tetch in order to end this.

Meanwhile Jervis Tetch is ‘tooling up’ in his efforts to get Alice back form the cops. He first acquires an amusement park hideout, and then he goes about putting together a gang. What’s a good villain without one? Tetch manages to hypnotize a group of wresting brothers known as the Terrible Tweeds. The stout siblings are just what he’s looking for as he plans to attack the precinct and get Alice back.

Gordon goes back to the precinct and talks to Barnes about his situation. After a bit of back and forth, Barnes gives him five minutes with Alice. Alice explains about the long-term effects of her brother’s hypnosis. She also tells him that she won’t go back to her sibling. She implies that he abused her and that she wanted to kill him. And, speak of the devil, Jervis and the Tweeds show up. They tussle with the cops and Tetch easily manages to get Alice away from Jimbo who again tries to do away with himself. Barnes stops him this time.

Later, as he recovers, Gordon finds himself in the company of his old flame Lee. She tells him about what happened after they split up and it has an effect on Gordon. Lee implies that she doesn’t want to lose Jimbo as a friend. Meanwhile Bullock gets the location of Tetch’s hideout from the only Tweed brother that they have in custody. Then it’s Bullock and Gordon off to the rescue. Back at the hideout Jervis has his sister dressed up like Alice in Wonderland and he tries to impress upon her how he needs her. At that moment Gordon and Bullock show up demanding that Tetch let Alice go. He refuses but offers to lift the hypnotic effect on Jimbo if he’s allowed to leave with Alice. Gordon replies only that he’ll let Tetch live if he gives up. Tetch has one of the Tweeds start a metronome. It’s clicking stops Gordon in his tracks. But this time Jimbo has figured out how to beat the effect and he is finally able to shake it off. He shoots the metronome. Gunplay and violence ensues. During all this Alice struggles to get away from Tetch and falls to her death in the attempt. A heart-broken Tetch then manages to escape with the help of the remaining Tweeds. In the aftermath Barnes, who arrives on at the scene, manages to get a bit of Alice’s blood on him. The effects can be seen to start taking hold.

In the meantime Gordon and Lee meet up back at the precinct and they decide to try being friends.

It’s election day in Gotham — funny how that came about so quickly — and the Cobblepot mayoral campaign is in full swing. Seeking to leave no stone unturned on the road to victory, we find Penguin’s number one guy Butch greasing the palms of election officials. Butch’s efforts don’t go unnoticed however. Ed Nigma, who Penguin had released from Arkham to join the campaign, keeps a close eye on the money that is changing hands here. Something about this practice rubs Ed the wrong way and he speaks to Oswald about what’s going on. Oswald assures him that this is the way things are done in Gotham politics. Nevertheless Ed decides to keep an eye on Butch and his shady dealings. Hope those running the donald chump campaign aren’t watching this and taking notes 😉

Butch, meanwhile, has his own suspicions about Nigma and orders one of his goons to follow Ed around in his travels. Butch realizes that he will be the one who controls Gotham’s underworld, and maybe even a bit more, if Penguin becomes mayor. So when he finds out that Ed managed to give the flunky tailing him the slip he becomes most concerned. And with good reason, as it seems Ed managed to retrieve all of Penguin’s bribe money that Butch distributed. When Butch finds this out he wastes no time in pulling a gun on Ed and telling him to say his prayers. Even Oswald seems hesitant to help his friend but as Ed is about to get jacked something happens. In the background they hear the election results and, surprise surprise, Penguin wins. As the weapons are holstered Ed explains to Oswald that he believed Oswald could win without the use of underhanded practices. Touched by the faith that Ed displayed in him Oswald, during his victory speech, announces that Ed will be his new chief of staff. Butch, who obviously had been expecting that job, is not pleased by this new turn of events. No, he is not pleased at all.

Things at stately Wayne manor in a bit of a turmoil. Young Bruce Wayne is quite upset over the disappearance of his Indian Hill created clone, Five. The carbon based copy ran off at the end of last week’s episode and Bruce wants him found. After all someone walking around who looks and sounds exactly like the young billionaire could cause all sorts of shenanigans. Fortunately Alfred gets a call from the cops saying that the Rolls has been found in the Narrows. Bruce deduces that Five has gone to look for Selina since the location where the Rolls was found in the Narrows is near her place.

Five, in turn, has acquired the Rolls Royce from the Wayne manor garage and gone off motoring in search of Selina Kyle. Apparently he’s become quite taken with her since spying on the conversation that she and Bruce had last episode. Of course he has no trouble finding her. He even thinks to inquire about her friend Ivy. Selina tells him that she’s found no trace of Ivy even after risking a confrontation with Butch’s nephew Sonny for information on her. She notices that Five doesn’t seem to recognize Sonny’s name even though Sonny gave Bruce an award-winning ass whipping last season. Five manages to play it off. Selina then brings him in on her plan to rob a betting parlor. It seems that the mayoral race is big business among the city’s degenerate gamblers and this establishment is flush with cash. Telling Five to wait around back, Selina goes in and proceeds to create a diversion. This gets her into the cash room but all too quickly things go off the rails. She gets caught and the two goons, Boss and Squirrel, in charge of the cash room decide to make an example of her. As they start to relieve her of her fingers, Five interrupts to save the day. There’s a bit of the rough and tumble and Five’s superior fighting skill, which we witnessed a small bit of last week, makes short work of Boss and Squirrel. After seeing that, Selina wastes no time in getting Five out of there.

Afterwards Selina commends Five on his fighting skills and then notices that he’s bleeding from a wound in his abdomen. One of the goons slashed him with a knife. She also notices more scars on his abdomen and realizes that he isn’t Bruce Wayne. Five comes clean and tells her everything. When he tells her that he’s never had a friend she dismisses the whole friendship thing as being overrated. “I had two friends,” she tells him. “One ended up barbecued and the other’s at the bottom of the river.” Five then asks her about Bruce. He noticed how she looked at Bruce when they were at Wayne manor. Selina blows him off about Bruce but Five can tell she’s not being truthful. He does take this opportunity to make a small move on her. He kisses her and she doesn’t resist.
Bruce and Alfred catch up to Five after he and Selina part ways. Bruce is adamant in finding out what happened to Selina but Five tells him no to worry. He also implies that he knows more about Bruce than he’s let on. “For someone who has everything, you have no idea what you actually want,” the clone tells the original. “Or maybe you’re just too scared to take it.” He then tells Bruce that he has no plans to hang around Gotham. He then exits stage left leaving Bruce and Alfred pulling stupid faces.

On his way out of the city a limo pulls up beside Five. The window rolls down and Katheryn calls the clone over. She tells him that they have been looking for him for quite some time. Just then the man in the mask steps up and drugs him. Katheryn says that they have big plans for him.

I’ll just bet they do.

Gotham Recap: “Look Into My Eyes”

Straight through the looking glass emerges a new villain with whom the people of Gotham will have to contend.