Earlier this month, during the first day of the sixth season of the ATX Television Festival in Austin, Texas, in a dual panel for Pretty Little Liars and Famous in Love, creator of both shows I. Marlene King spilled some secrets surrounding the final episodes of the infamous PLL. 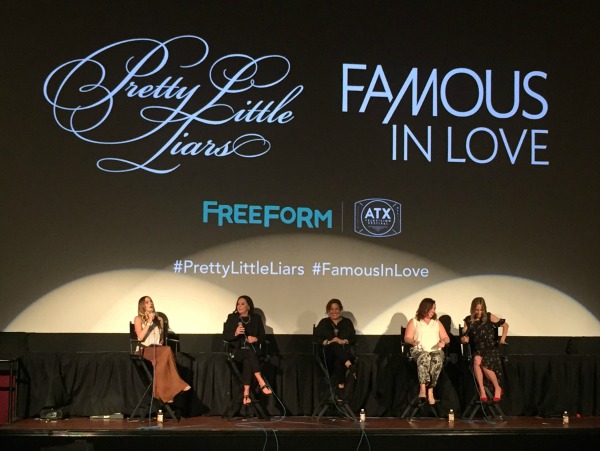 The panel including King, Lisa Cochran-Neilan (EP), Camera Dale (Costume Designer) and Jennifer Gerstenblatt (Freeform VP of Current Programming) dished on some of their best and toughest days balancing both shows.

First and foremost, King revealed that PLL fans will hear wedding bells before the show ends for good. But it won’t be just one couple, but multiple.

“We’ve always said that there was going to be at least one wedding, but I can promise you that in the next three episodes, there will be two more weddings on the show,” King revealed.

Since King didn’t specify, I’m now asking myself will it be Aria and Ezra or Hanna and Caleb since they’re both already engaged. There is also a chance that Spoby could be reunited and even Emily and Alison since they are planning to raise a child together. Honestly, the possibilities are endless!

Panel goers also got the inside scoop on a very special scene that will air during the top of the second hour in the 2-hour series finale. While there were no specific details revealed about the scene, Cochran-Neilan told the audience the actresses wanted to shoot the finale scene of production together.

“These ladies that you’ve grown to love, they came to us and they asked us if the last scene of the last day of the last episode, if they could all be in the last shot. In our shooting schedule, it was the last shot,” Cochran-Neilan said. “It will be my favorite moment because everybody was there. It was very late — or, shall I say very early in terms of time — but I will tell you that there was a sincere feeling of closure at that moment. Everybody was there. There wasn’t a dry eye in the place.”

Cochran-Neilan couldn’t express enough how much the actresses wanted to end the series the same way it started 7 seasons ago, together.

When asked if there are any plans for spin-offs or additional trips to Rosewood, King said they knew season 7 would be their last and was happy to know when the ending was to make sure it was perfect for them.

“We built something very special and you guys are all a part of it,” King added, addressing the fans. “The show won’t air after three more episodes, but we’ll always have this. All of us.”

While PLL is coming to a close, fans of King still have Freeform’s new hit Famous In Love to binge. The panel mentioned that a lot of the same people from writer, producers and costume coming from the PLL team.

Cochran-Neilan even told the audience how the actresses of PLL “passed the torch” to the cast of FIL. Gerstenblatt reminisced on the PLL actress mentioning the FIL cast in the “new generation.”

The series finale for Pretty Little Liars airs June 27, both shows are on Freeform.

With just the series finale left, there are still many questions surrounding the fate of the Liars. While all theories...