On Fear the Walking Dead, Madison’s loyalty gets questioned; Strand’s plan is revealed, and the wreckage of a downed flight provides some needed supplies. Find out what else went down on FTWD in this week’s recap from Special Contributor Tracey M. – David F. 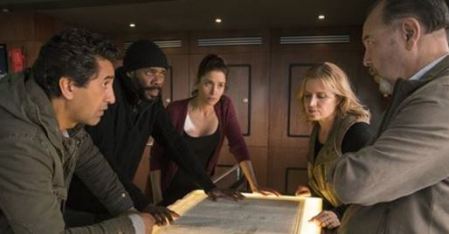 Strand talks on the satellite phone during the night, re-confirming that he is on his way. Travis lies awake, worrying about the future. Maddie notices Travis isn’t able to sleep. Maddie and Travis start to kiss and reconnect but are interrupted by a loud noise followed by silence from the engine.  There’s a problem with the yacht; the ship won’t move. Travis volunteers to swim under the boat and check out what’s going on. They need to keep moving. It’s not safe at sea. As Travis dives deeper, he sees a floater with his arm stuck in the intake valve. Yuck! Travis says it might take a day to fix, and Strand jumps down his throat to get it done. Travis doesn’t work for you, Strand, you pompous ass! I’m not the only one having a problem with Victor Strand this week.

Daniel is concerned that Ophelia’s wound is not healing, but insists that the Salazars stick together and depend on no one. O-o-okay, Daniel, haven’t you been depending on Strand? I’m still wondering about the skeletons in Daniel’s closet. Through binoculars, Ophelia spots a plane wreck on a distant beach. Ah, the infamous flight 465. While Travis works on the boat, Chris suggests they pick up some much-needed supplies from the beach. Daniel volunteers to chaperone Nick, Alicia and Chris to the beach and keep them safe. The kids find some body parts, and other unpleasant remnants. It appears the wreckage has been there awhile. Flies buzz about while the kids scavenge under Daniel’s supervision. Chris snoops around the tail end of the wrecked plane. He heads inside the cabin. There’s a walker still wearing his seatbelt, and an oxygen mask. Chris taunts it awhile before killing it. He’s liking this a bit too much. I guess he’s embracing the madness. In the next seat, a man begs Chris to help him. The man has broken his back. Chris can see vertebrae poking out of his skin. Again, he begs Chris for help, he’s suffering and dying slowly.  Chris bludgeons the man repeatedly, until he’s sure he’s dead. He just keeps swinging, as if he can’t stop. Chris backs away from what he’s done, upset and confused.

Back on the yacht, Maddie anxiously watches over the side of the boat waiting for Travis to emerge. There are bubbles, then blood before Travis finally surfaces, much to Maddie’s relief. Well, I guess that floater is out of the intake valve now. Maddie confronts Strand about heading to Baja. Strand says there’s a safe place there. Maddie makes him swear not to abandon her family or the Salazars. Victor reminds her that he’s kept his word so far. Yeah, so far….

Nick’s made a decent haul from the wreckage, but Daniel refuses to take any clothes from the dead, says it’s bad luck. This whole scene is bad luck, man! Alicia is happy to be spending so much time with Nick. She’s glad to have her brother back. They have a sweet moment together when Nick finds a sun hat for her.

Maddie heads below deck to see how Travis is doing. She tells him Strand’s plan to head to Baja, and believes they should trust him. Travis isn’t happy that Maddie wants to go along with this. Maddie’s not happy about having her loyalty questioned.

On the beach, a woman runs down from a dune, screaming for help, warning that walkers are coming. Her name is Alex (Michelle Ang), and she’s got an inflatable raft from the wreckage. A horde of walkers begin to head down from the dunes. Likely more victims of the crash. Daniel has his gun out, but where the hell is Chris? They’ve all been calling for him, wanting to get back to the dinghy. Nick is foolishly looking into a hole, watching a trapped walker covered with crabs. He manages to kill him when another tumbles into the hole, taking Nick with him. Alicia finds Chris, asking him where he been. She can see that he’s upset. Drawn by the noise, walkers head their way. Hmmm, guess the yelling was a bad idea. The group is forced to fight off the herd, and Daniel hurries to get them back to the dingy as soon as possible. They all pitch in, savagely striking out at the walkers. Nick wears blood and gore like war paint. Strange as it seems, he is in his element.  Alicia stares at her brother, proud and scared. Nick has a staring contest with a walker, but notices the walker ignores him. Valuable lesson, right there. If you smell as bad as they do, walkers don’t see you as food. All aboard the dinghy, Daniel heads back to Abigail, towing Alex and the raft.  Anyone on the raft that has been bitten gets an oar to the head and a quick drop into the ocean. They started as a group of four, but now there are only two.

Strand says there’s no way they’re taking those people with them. Maddie speaks up. She insists they could at least continue to tow the refugees, and give them water and some food. A young man is badly burned and Alex tends to him the best she can. It’s hard for Maddie to watch that little raft trailing behind the yacht. Nick hasn’t changed his clothes and he smells awful. He managed to find a rosary for Ophelia and she is grateful, but not downwind of Nick. Maddie can’t stop watching the raft, there must be something more that they could do. Strand abruptly runs down and cuts the tow-rope.  Alex and Maddie lock eyes. Maddie is horrified and devastated as the vessels drift apart. Strand is a cold, cold man and Maddie is questioning her trust in him. Hey, Strand, Karma’s a bitch.

Fear The Walking Dead Airs Sundays on AMC at 9/8c.

FTWD is back and it looks as if Los Angeles is on fire, and Strand’s yacht is the safe harbor....