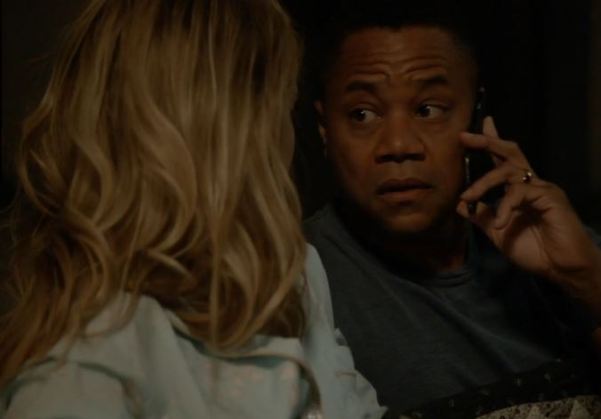 A fresh Hell, indeed. This situation is deteriorating rapidly. Police retrieve Flora’s jacket from the treetop. The officers seem dubious of the Millers’ constant calls. Matt knows they think he, Shelby and Lee are nuts, and he wonders if they could be in cahoots with the hillbillies. Police dogs and volunteers with flyers search the woods in grids. Shelby hears Lee screaming and runs to find her staring in horror at Flora’s doll whose head and legs were replaced with those of a piglet. An horrific new spin on Mr. Potato Head! Matt catches up to Lee and Shelby. As the search continues, the three find a small, rundown vacated house.

And now we come to the reason why so far, for me, AHS season 6 has been more disturbing and at times, harder to watch than “Asylum”. They search the house and find nothing more than animal parts, maggots and flies. Smells pretty bad, too. Strange noises are coming from the barn. They go outside toward the noise, and the yard is strewn with dead piglets, so, hey, let’s go in there! No Flora, just two inbred subhumans suckling on a sow which may be dead. They can speak only one word: Croatoan. They’re gray with dirt, their mouths ringed with milk. Gag! The police take the two abandoned Polk boys to the station and clean them up. They just repeat: Croatoan. At least they got a good scrubbing out of the deal. Mason bursts into the police station angrily demanding answers. (Now that’s fiction!) He joins the search which continues into the night. Everyone is running on fumes, so the Millers, and Lee and Mason head back to the house. Mason immediately gets in Lee’s face, accusing her of kidnapping and hiding their daughter.

Matt steps in when Mason gets a bit too physical and he storms off. Lee, Shelby and Matt try to get some sleep, all of them asleep before their heads hit their pillows. Soon after, Matt’s cell rings. It’s the police, they’ve found something. At the scene they find a body, bound to a wooden circle, burned beyond recognition. A ring recovered from the body is Mason’s. Another crispy critter. That morning, Matt sees he missed two security alerts on his phone in all the chaos. There’s video of Lee leaving during the night and returning hours later. Lee denies taking any part in Mason’s death while Matt knows Lee has reasons to want Mason out of the picture. Permanent loss of custody? Hmm. Lee swears she didn’t go anywhere. Shelby joins in, so no one noticed a peculiar little man strolling into the open front door sporting a cane. He says his name is Cricket Marlow (Leslie Jordan), and spirits summoned him to help their family. I would have just punted him out the front door. Nice to see Leslie Jordan back on AHS. His last appearance was during AHS:Coven, where things didn’t work out so well for him. Cricket’s a nationally-known psychic specializing in locating the missing. (Shelby Googled him and found out he was telling the truth.) He struts and clicks around the house, tapping his cane occasionally. He goes directly to the small closet where Flora went to play with “Prescilla”. Hmm, seems he knows his stuff.  He finds Priscilla’s bonnet inside and says he senses that Flora is still alive. He suggests they hold a seance, contact the entity in charge. They sit around a table, a huge, black candle in the center.

He recites incantations of protection, but is no match for “The Butcher”, Tomasyn White, portrayed by a favorite of mine, Kathy Bates. She speaks with a wonderfully rich brogue but does unspeakable things. And there’s one worse than her to come.

Back to our seance. I guess Tomasyn has had enough of Cricket’s protective blather and throws her cleaver directly through the center of the black candle. They all see the candle split, but Cricket is the only one who can see who threw it. The psychic attempts to stem her anger by shouting “Croatoan”. She answers by blowing out every window in the room. Glass flies everywhere and Tomasyn screams that this land is soaked with the blood of her colony and she’ll destroy all trespassers.

Okay, that would be more than enough for me, but we still haven’t found Flora! Cricket offers to help for $25K, and Matt is ready to toss him out by the seat of his pants! He heads to the door and whispers to Lee that “Emily says ‘hi’”. The next day, Lee pays the $25K. Emily was Lee’s daughter, born when she was 17. She was stolen from Lee’s car when she left to run a quick errand.

Cricket’s plan of attack is knowing all there is to know about the enemy. Tomasyn White was the wife of John White, governor of the colony. Their land of plenty was drying up. When John decided to return to England for supplies, he left his wife in charge. Soon, there were grumblings of a mutiny; the food was scarce and Tomasyn was a vicious governor, using human sacrifice in in hopes of the return of plenty. Didn’t work, though. The colony decided to banish their leader, binding her in a spiked, iron head-cage tethered to wrist shackles. Her own son, Ambrose (Wes Bently), applies the lock and Tomasyn is tossed into the woods. Lost, scared and starving, she feels close to death. The squeals of wild boar terrify her, but this night there was a squeal of pain. The SoulTaker (Lady Gaga) has come to free Tomasyn and add her soul to her collection. She promises the governor a return to power, the entire colony at her heel. The headgear falls off, and Tomasyn eats the still-beating pig-heart. She returns to the colony refreshed and restored. Soultaker promises to return Tomasyn’s power then she offers her the still-beating heart of a boar, which Tomasyn eats. Nothing like fresh pig heart! Cleaver in hand, she returns and kills every colony member. Tomasyn kneels and yields to The SoulTaker. Her throat is slit and she rejoins her colony. Now they will do her bidding! The land they claim is the land the Millers’ house is built on. This can’t be good.

They mystery of the chilling events at the house grows darker and more dangerous on American Horror Story: Roanoke