StarTalk TV Does the Guinea Worm with Jimmy Carter 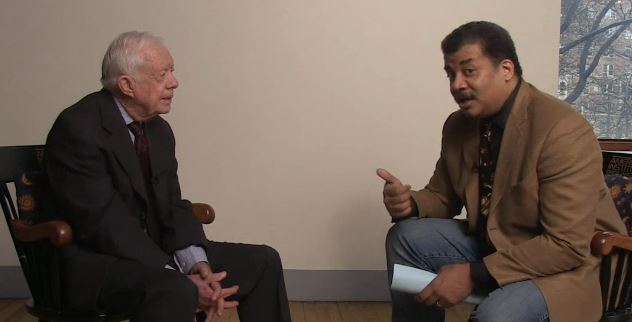 This episode of StarTalkTV could have probably used a trigger warning of some sort. It was graphic, Aliens-graphic almost, but it was also one of the more feel-good things you could see.

Why? Well, Neil deGrasse Tyson’s office guest this week was Jimmy Carter, the 39th president of the United States of America talking about despicable worms and the possible eradication of a dreadful disease from the planet.

Joining Tyson at the Hayden Planetarium were parasitologist Mark Siddall of the planetarium and comedian Chuck Nice. Siddall studies parasitic diseases and is working with The Carter Center, which among its humanitarian efforts, seeks to stop diseases, as shown at an exhibit at the American Museum of Natural History (home of the Hayden) called Countdown to Zero – Eradicating Eradicable Diseases.

The disease focused on in the exhibit is called Guinea Worm or Dracunculiasis. Nothing that sounds like Dracula is ever good and this is no exception. Those who easily find themselves freaked out by parasitic diseases might want to check out now, because there’s an actual worm and it’s actually in people, until it causes pain and suffering, and then it isn’t.

Does it suck? Back at the planetarium’s Hall of the Universe, Siddall explains that his job is to study parasites like leeches. Asked by Nice why he does this, he responds in best dad humor, “It doesn’t suck that bad.” Nice laughed hard; though I believe the in audience groans reached the edge of the galaxy.

It’s all in us: Siddall begins creeping us out when he discusses internal parasites and offhandedly mentions that “We’re the cans that other things come in.” Shudder.

Do the worm: Finally, the discussion turns to the Guinea Worm itself and why it needs to be extinct. Siddall explains that the parasite grows to 3 feet in length and has been with humanity for the past 7,000 years. How bad is this, well, it’s a Biblical plague for one. The worm completes its lifecycle by burrowing out of human legs and spitting its eggs into untreated water supplies. Siddall explains that it’s the only parasite that needs to inflict pain on people to continue its lifecycle. There are pictures shown, I won’t describe them, except to say: Arrrrrrrrgh.

Now the good news: Turns out that only humans get Guinea Worm disease. No humans, no Guinea Worm, he explains. Seems like an extreme solution, but what do I know?

A huge task: President Carter explains that the scope of fighting this diseases has been huge as it has required going to 20 countries and 23,600 villages since 1986. He says The Carter Center has been to them all. But the main point is to get the residents of these villages and the government s that support them to fight these types of disease themselves through education and prevention.

A long time coming: Siddall then explains what it is like to actually develop Guinea Worm disease (Mrs. Recapper, stop reading now). Basically this thing can take up to a year to grow, from an egg in the drinking water to 3 feet inside of the human body. In a brilliant, evil survival strategy, the worm causes so much pain that those suffering from it find the nearest water supply to cool the pain. The worm emerges (usually from a leg) and then gets to spread its young into the water supply. “These are dragons.” Siddall says speaking of the pain they cause.

Overcoming overconfidence: The issue in fighting a disease like this one is that to eradicate it, you have to get rid of all cases, Carter explains. Doing so would effectively kill the disease, since there’s no other way to transmit it. He says the biggest threats to progress are political instability and leaders who get overconfident as they see the number of cases drop and let down their guards.’

Naming your price: President Carter tells of how he needled Ghana into action. After the disease had dwindled there to a few dozen cases, from its peak of 126,000 cases, Carter said he felt the government wasn’t acting forcefully enough to finish it off. Exasperated, Carter used some chicanery, telling the president of Ghana they would change the name to the Ghana Worm if the efforts weren’t stepped up. There is no Guinea Worm in Ghana now. Nobody wants a disease named after their country, Tyson says.

The verge of success: What the episode boils down to is the fact that Siddall next mentions. There were 126 cases of Guinea Worm on the planet as of this episode’s airing. He later explains that there were 3.5 million cases of the torturous disease as recently as 1986.

Extinction ok: Would Siddall miss the Guinea Worm once it was extinct, Tyson asks. After all, what’s a parasitologist without parasites to study? Siddall explains that he’s sentimental about ending pain and suffering in humans rather than saving an organism. Since the worm depends on human pain for its survival, he’d be happy to see it go.

Bill Nye dogs New York: Bill Nye’s recorded bit was notable not so much because of what he says – the biggest challenges to human health are the microscopic ones like parasites – but what he does. Since the segments all feature him in an NYC location, this episode features him ordering and eating a NYC street hotdog. Whoa.

Chuck Nice goes for the laugh and gets it, saying “Half the stuff he talked about was on that hotdog.”

This will probably keep you up nights:  Finally, Tyson asks Siddall about his remark earlier about humans being containers of other species. Siddall responds saying, “Where the human species stops and starts is very fuzzy…” Tyson stops him. “Wait. Say it again, but don’t freak me out.” 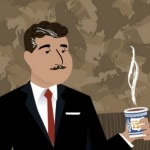 When it comes to TV watching, DavidF is a sucker for classic comedies, anything mechanical with wheels, nature shows and things being built.

StarTalkTV: Can Science and Religion Co-Exist

StarTalk TV goes to either the end of everything or the beginning of nothing, depending on your perspective. This episode...